Hello again everyone, and sorry for the delay in getting this post up.   Here’s the game thread for last Saturday’s overtime loss to Calgary.

It was a good hockey game that had a bit of everything: great-looking goals, last-second saves, and even a couple of pretty decent fights.   In fact the only thing missing from the game was a second point for the T-Birds, as that game was just their first overtime loss of the season.   So enough with the chit-chat, let’s get to the photos!

For this game I tried something different: I didn’t start out shooting from above the glass.  Eventually shooting from the same spots every game will get repetitive and you’ll start seeing the exact same shot as you did a game ago or two games ago.  So to break myself of that (and to keep it more exciting for me) I’ll change up my routine.  Today I spent the first two periods behind the glass, moving between spots behind the goal on the north side (the side where the players and zambonis get onto the ice) and right across from the T-Birds bench.  In any rate, I got luckier with the glass that night, as a number of photos I took from that spot are pretty clear and unaffected by the thick plexiglass. 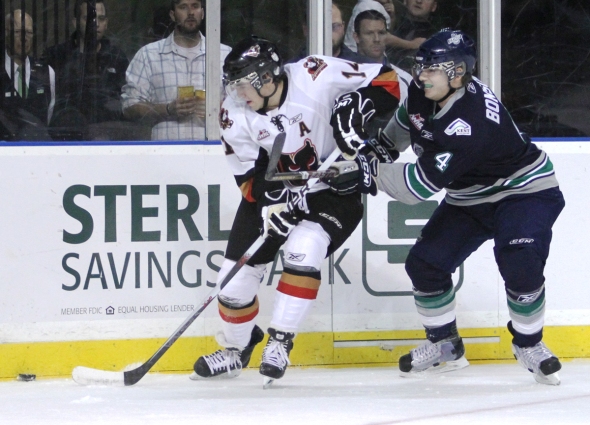 Now I’m going to teach you a trick that’s useful in all sorts of photography, but absolutely necessary in sports photos: cropping.  It’s needed in sports photography to focus in on the action and eliminate all dead space surrounding it that ruins the photo.  Let’s use a shot of Calvin Pickard making a save.

Goalie Calvin Pickard makes a save during the first period.

Now as you can see in the photo above, I was as wide as my lens would allow me to be (98% of my shots are taken with a 70-200mm lens).  Since I had Pickard centered in my shot for focusing reasons, there’s a lot of dead space on the left of the shot, and the players to the right merely distract from what’s going on.  So let’s take them out of there, shall we?

Now, by merely cutting out what I don’t want seen, we have a pretty nice shot of Pickard making a save.  It’s also now easier to see the puck in the middle of his pads.  Before, there was just too much distracting information for your eye to notice it.  With all of those distractions gone, however, the puck is much more visible.  Amazing, huh?

Onto the next shot now.  Here’s a photo of Brenden Dillon fighting Calgary’s Ben Wilson.  For whatever reason, I got numerous good shots of Dillon Saturday night.  I tried to get as many other players in the post as possible but apparently Dillon was working it for the camera that night.

Defenseman Brenden Dillon throws Hitmen defenseman Ben Wilson to the ice during a fight in the first period.

And here’s some more photos.  Sorry there’s no cool intro for them, but I can’t think of a good one right now.  Let’s just say they’re a good representation at how even the two teams played. 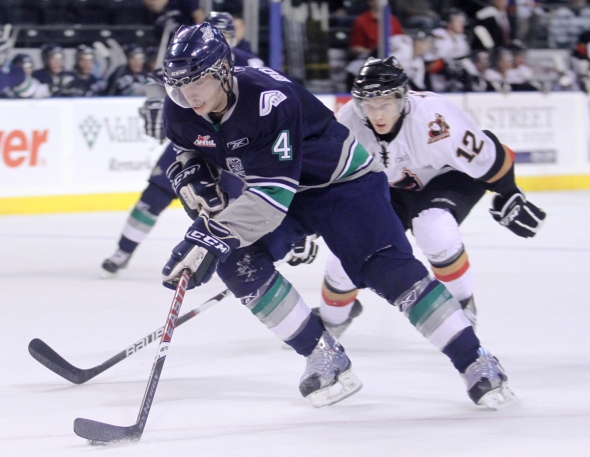 Bonsor keeps the puck away from Calgary leftwinger Justin Kirsch.

Center Luke Lockhart fights for the puck with the Hitmen’s Bubnick behind the Calgary goal in the second period.

I’m proud of myself for this next shot: I actually remembered something I had to look for during the game!  Media Relations Director Ian Henry told me to look for kids wearing the beanie given away before the game.  Well, I found a group of excited young boys during a break in play that seemed to really want to get on the jumbotron.  I’m not sure if they ever did or not, but they were dancing well enough to be put on there… 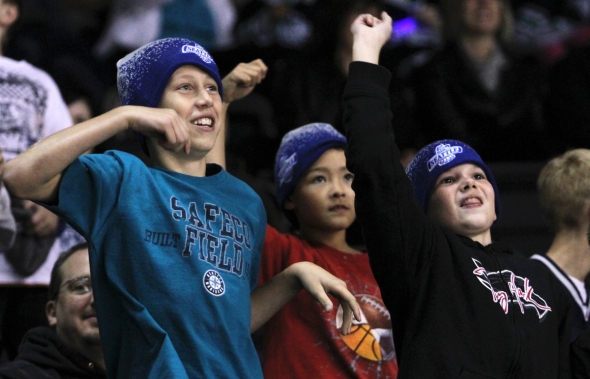 Young T-Birds fans dance during a break in the action in hopes of getting shown on the jumbotron.

I’m still looking for a good goal photo from behind the glass: one where you can see both the puck going into the net and the face of the player who got it.  I know I’ll get one eventually, but sometimes it’s hard for me to remember to concentrate on the player in front of the goal instead of the guy with the puck.  In the second period of Saturday’s game, though, I thought I might have had a chance when Luke Lockhart had a nice shot on goal.  Unfortunately, it was blocked by the Calgary defense and eventually cleared.  What turned out was still a nice photo, but unfortunately one of a great play for Calgary instead of for Seattle. 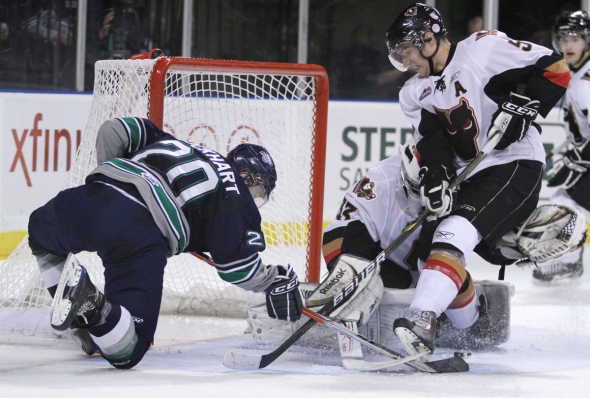 Lockhart battles with Calgary defenders to get the puck into the net in the second period.

Here’s another Brenden Dillon sighting.  He got an assist for a pass to Tyler Alos in the second period.  Of course I had to put this shot in…

Dillon passes to teammate Tyler Alos- who then put the puck in the back of the net- in the second period.  It was the first of two assists on the night for Dillon.

And here’s Alos acknowledging Dillon’s pass after the goal.

Here’s a photo of the second fight of the evening.  In it, rightwinger Jacob Doty took Calgary’s Cody Beach to the ice.  In fact, the two T-Birds fighters of the evening both took their opponents to the ice.  Even if it didn’t matter on the scoreboard, that was nice to see.

In college when shooting for The Daily, there’d always be games where I’d get better photos of the other team than I would of the Huskies.  Sometimes it would turn out ok because we’d run some of them as long as they made sense with the game story and every once in a while we’d send them to other school’s student paper.  When shooting for a team, though, there’s no spot for these photos to go.  That’s why I like having this blog; in it, I can put all my shots from a game.    I don’t have to worry about will it make sense with a story or is it a photo of the other team.    So I’ll throw in this photo of Calgary goalie Juraj Holly knocking away a shot by Chance Lund.  I thought Holly had a pretty good game and was pleased to have a photo of him. 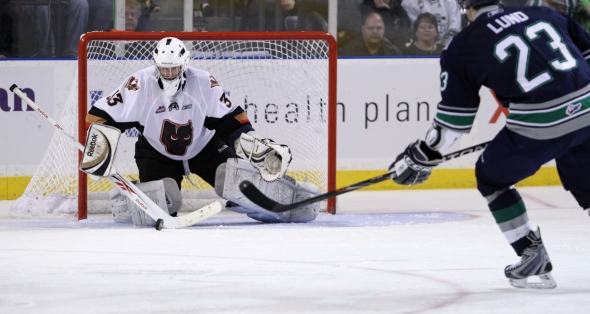 During the third period, I was in my normal third-period spot between the benches.  Despite what I said earlier about changing things up every once in a while, I thinkI’ll be spending every third period there so I know I’ll have some good pictures no matter where I am for the first two.  Anyways, I remembered to keep an eye on the T-Birds bench for any good photos there.  During one of the timeouts in the third, I found assistant coach Turner Stevenson talking with one of the T-Birds.  I remembered to take the photo, I just wish I thought to stand up.  That would have made Stevenson’s arm visible and made a much, much stronger photo.  I’ll get it next time, though…

Dillon chases after the puck with two Hitmen in pursuit.

I like trying to get photos of players on defense.  It’s a side of the game that doesn’t produce quite so many images as offense or hits, but it’s still important to play good D.  Here, center Travis Toomey is covering a Calgary attacker well.

I think these next two photos would be great for a caption-writing contest.  In fact, if I ever get to give away something in a contest, that’s what I’ll do.  But until then, just enjoy them and that what you like about them.

Center Travis Toomey (right) and Calgary center Cody Sylvester both have a good view of the puck while battling for it in the third period.

Head Coach Rob Sumner discusses things with Coach Stevenson in the intermission between the third period and overtime.

And here’s the last of Brenden Dillon for the post.  But of course, it’s a series of photos.  Watch as he takes a slapshot towards the Calgary goal in overtime. 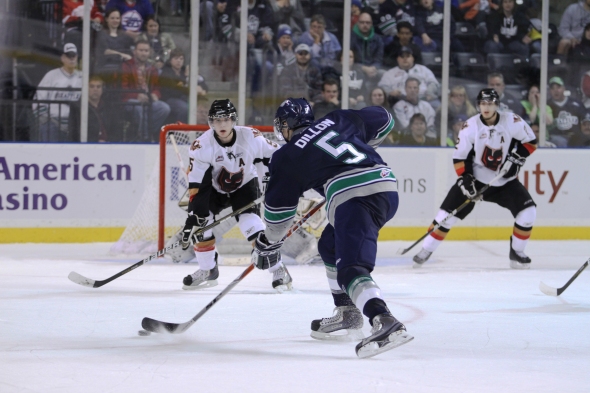 Overtime was just as hotly contested between the two teams as regulation was.  Let’s include a shot of Burke Gallimore trying to disrupt a Calgary player to prove that… 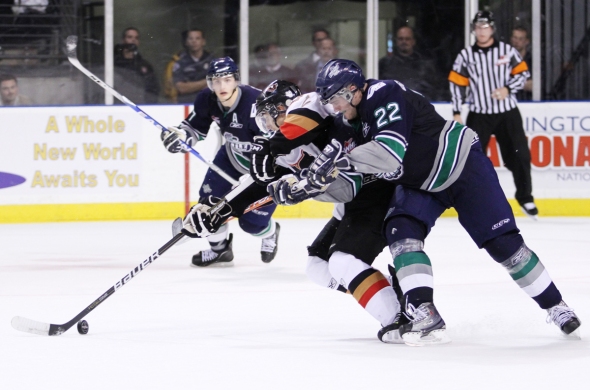 Rightwinger Burke Gallimore tries to disrupt a Hitmen’s handling of the puck during overtime.

That’s all the photos I have for you today.  I unfortunately didn’t get a good one from the game-ending goal, but that’s just the way it is sometimes.  I’ll do better next time, I promise.  As always, feel free to tell me what you like, don’t like, want to see more off, or any other comments you may or may not have in the comments section below.

Til next time, go T-Birds!