Now that was fun to watch!  Last Friday’s (Jan. 7th) win against Kelowna was something special: it was just the T-Birds’ second home win since mid-November.  They’ve played well for the most part, but somehow found themselves on the wrong side of the scoreboard.  Against Kelowna, however, they out-shot the Rockets, out-defended (is that a word? I certainly hope so…) the Rockets and, most importantly, outplayed them.  All of those things combined to give the Thunderbirds a 3-1 win over the second place team in the BC division.  Let’s see how they did it…

Normally any photos of goalie Calvin Pickard are of him making a save or another outstanding defensive play.  Not this next one, however, as there weren’t too many shots for him to save in the first period.  Instead, here’s Calvin receiving an errant Kelowna clearance and knocking it towards a fellow T-Bird. 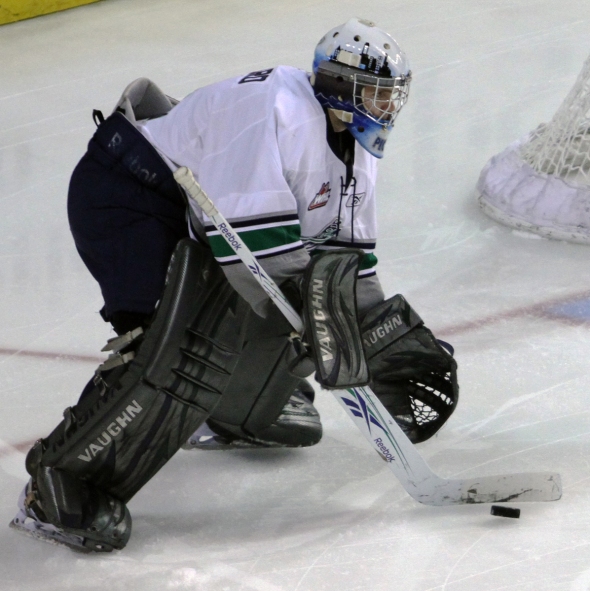 This next picture I’m putting in as a literary device (if a blog can be considered anything like literature): foreshadowing.  My, that glass bent an awful lot…

And here’s what the previous photo foretold; either that glass was shifted out of position or Jacob Doty hits really hard.   Either way, players generally don’t end up in the laps of fans with seats on the glass. 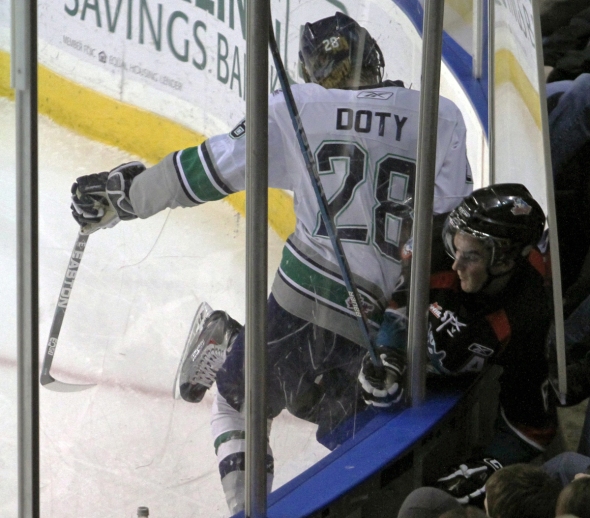 Right wing Jacob Doty checks Jobke into the boards near the south goal, shifting the plexiglass out of place.

Luckily the crack maintenance staff at the ShoWare Center quickly fixed the problem and play resumed in about five minutes or so. 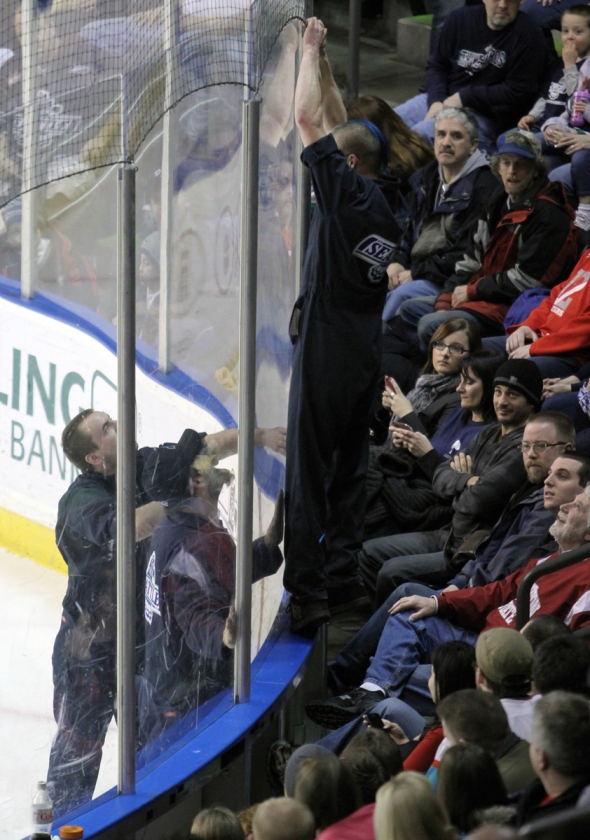 One of the hardest things to photograph in hockey, for me at least, is a save of a long-range shot.  I generally keep my lens following the puck; when it travels a long distance at high speeds, it’s very hard to see both ends of the play.  In order to do so, I need to point my lens toward the area the puck is heading, press the shutter halfway to engage the autofocus, and then press it down all the way to take the shot.  I often get out of focus images when I try to keep up with a speeding puck, but this time I didn’t.  What I got instead was this gem… 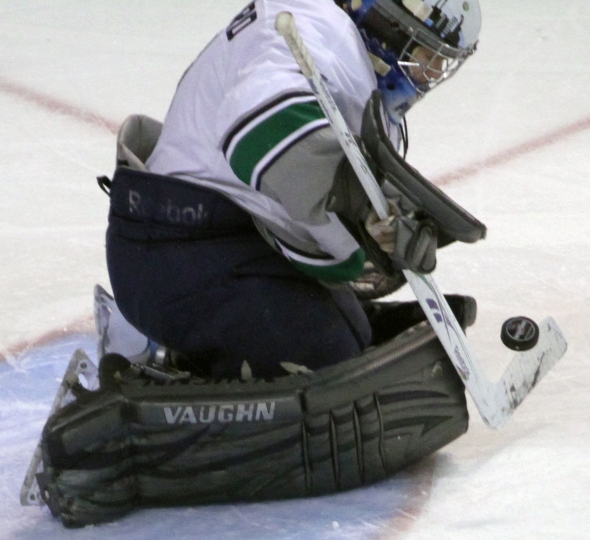 Calvin Pickard makes a save on a shot from the Kelowna Rockets in the first period.

What a great shot, huh?  What’s that, the top of Calvin’s head is missing?  That’s what happens when you speed-aim your camera: you don’t have time to correct the borders and you end up cutting off people’s body parts (photographically, of course, for I have not touched Calvin’s head in real life).  Photos with a partial head-ectomy are not how you advance in this industry; I need to do better if I want to get a head… err, ahead.

Done groaning now?  Good, let’s continue with the photos.  Here’s one of the Thunderbirds’ 16 shots on goal in the first period.

And here’s a shot of Doty fulfilling his other duties on ice: fighting and demoralizing the other team’s players… 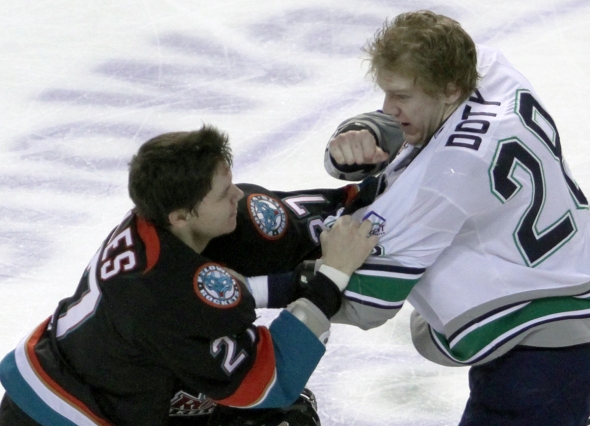 Travis Toomey has been playing well lately, putting five pucks in the back of the net since January 1st, and collecting one assist for a total of six points.  He scored one against Kelowna in the first period on Friday, but unfortunately I had a player blocking my view for that play.  I wanted to have a nice photo of him anyway, so here’s one of his other shots from the period. 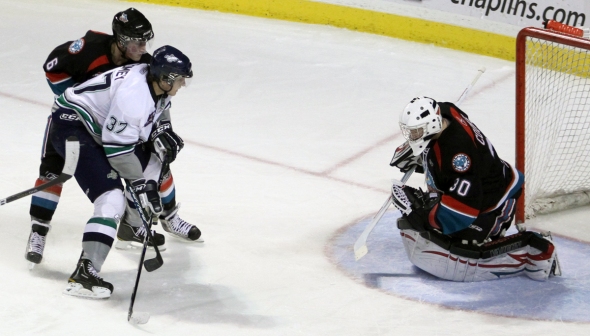 Center Travis Toomey takes a shot on the Kelowna goal.  Although this one was successfully blocked, Toomey managed to score earlier on in the period.

And our last photo from the period came just after the second T-Birds goal of the period.  Unfortunately I missed the goal, but I did get a decent image of the fans; it’s just too bad I had their backs to me.

In the second period, the Thunderbirds continued their offensive surge, throwing twelve more shots at the Kelowna goal.

This was Noebels’ first game back from the World Junior Championships, where he scored once and provided two assists in Germany’s six games in the tournament.  Since returning (and as of Sunday night after the Chilliwack game), Noebels has put two more pucks in the back of the net.  Worth another photo, right?

I couldn’t decide whether to put this next photo up on the blog.  It’s a nice decent moment—one of the goal scorers on the night taking a shot on goal—and in pretty good focus, but that black stripe on the right is pretty obvious.  That stripe is one of the poles of the guardrails on the staircase leading behind the north goal.  Once I saw that on my images, I decided to move into the small space between the glass and the rail, but for this shot it was a move made too late… Something else to remember for next time. 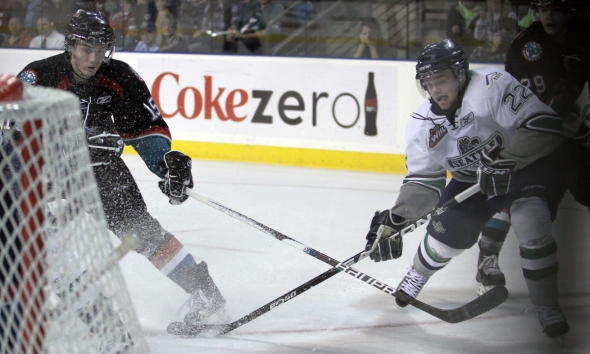 And here’s another shot of Noebels.  It’s funny how I go entire nights without a decent photo of some people only to get three or four keepers the next night… 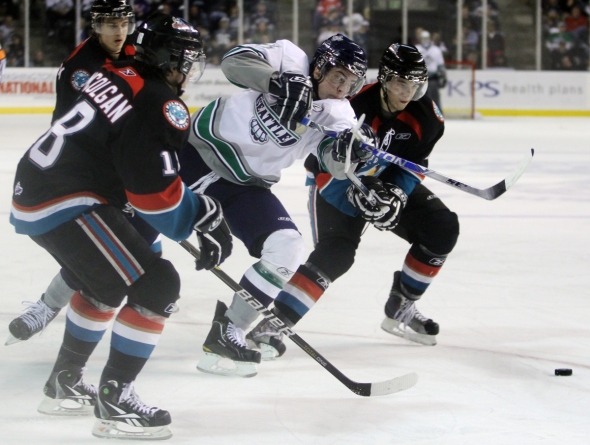 Late in the second period, center Charles Wells found himself on a breakaway with no one but Kelowna’s Jordon Cooke between him and a goal.  Kelowna defenseman Mitchell Chapman dove in an attempt to trip up Wells, though, and knocked the T-Birds’ center off balance.

Being brought to his knees, though, didn’t prevent Wells from his attempt to score.  He took a shot at Cooke from the ice.  Unfortunately, Wells wasn’t rewarded with a goal, although Chapman earned two minutes for tripping.

Shortly after, the period ended.  As the Thunderbirds went back to their locker room, this young fan offered a high five and words of encouragement. 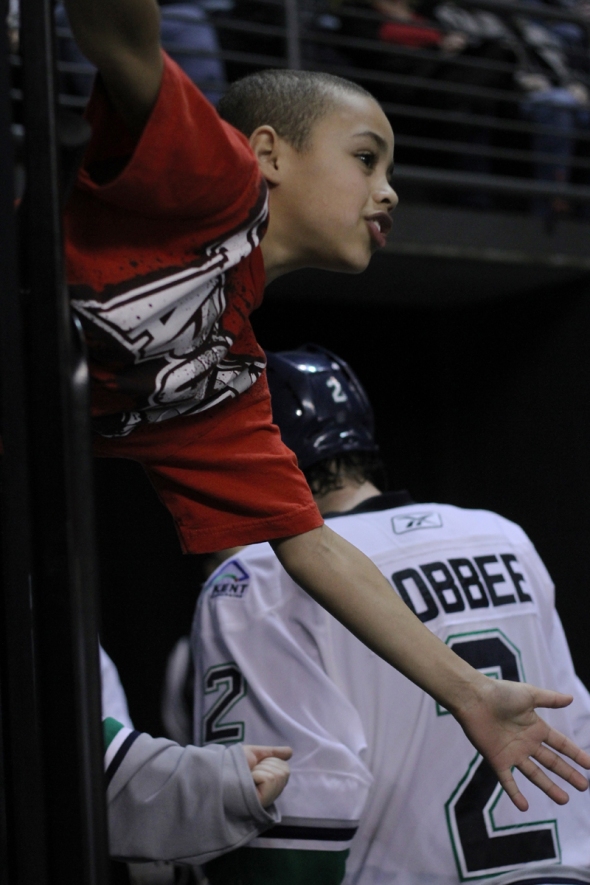 Now time for the third period!  I wanted to spend a bit of it shooting from the upper level again.  I’d be able to get photos of plays on both ends of the ice and I didn’t think I’d had such a good first period image-wise.  Being up there, though, allowed me to get an unblocked view of Noebels’ goal halfway through the period. 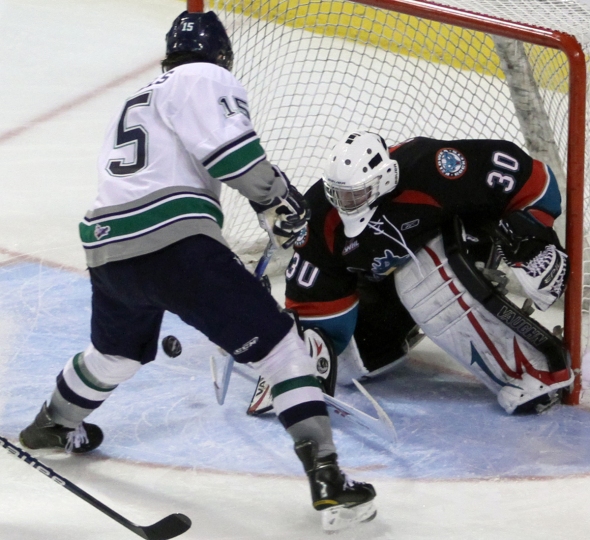 Noebels puts a puck past Jordan Cooke and into the Kelowna goal to increase the Thunderbirds’ lead to 3-1 halfway through the third period.

Shortly after the goal, I moved to the handicap seating in section 112.  It offers a good view of the ice at the south end of the building and is where many other photographers sit during the first and third periods.  I didn’t get many good photos from that position (or at all in the third period), but here’s one I kind of like…

And unfortunately that’s it for game photos.  For some reason I got fewer good photos than normal, but I think the ones posted are a bit better than normal.  I guess I went for quality and not quantity.   Oh well, we’ll see what happens with the next game!

Have any questions for me?  Want to say something about one of the photos on here (or not on here)?  Want to have an in-depth conversation on the importance of maple syrup on the global economy?  Feel free to post in the comments section below!