Well that certainly was an exciting couple games, now wasn’t it?  On Saturday the T-Birds lost an absolute heartbreaker when Portland scored in the final thirty seconds of regulation, and on Sunday Marcel Noebels happened on a four goal effort, his first hat trick in the WHL.  For this post we’ll concentrate on Sunday’s game against Everett since I’ve gone through and worked up a few photos from it for the WHL website already…

Let’s start with the first period (naturally).  The T-Birds seemed a tad sluggish to begin with—the game against Portland certainly took a toll on them—and were on defense for much of the first period.  They did, however, manage to get the puck up ice often enough. 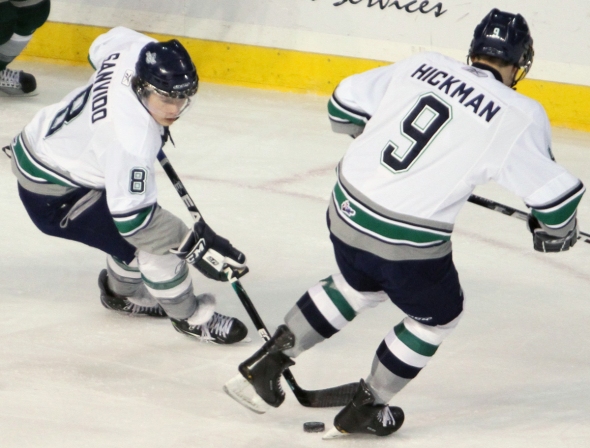 Center Connor Sanvido brings the puck up-ice while center Justin Hickman dodges past and cuts down towards the goal.

Despite defending for much of the period, the T-Birds still managed to earn 10 shots on Everett goalie Kent Simpson.

And here Gallimore gets another shot on Simpson, although is again blocked.

Center Luke Lockhart gets his chance in front of the Everett net but can’t bring in the puck to put it on goal.

And here’s our first shot of Mr. Noebels.  This time he gets rebuked, but it’s fair to say that Marcel came out on top in the end… 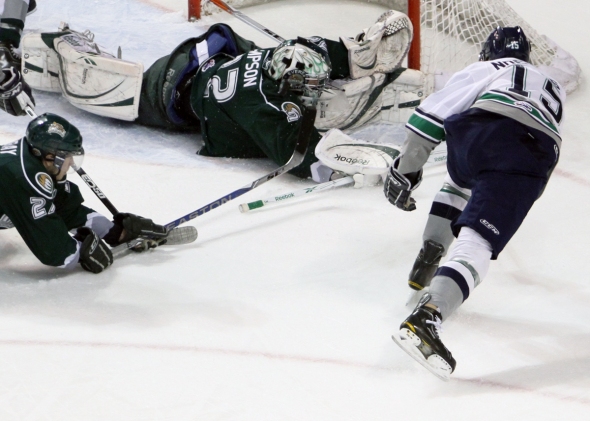 Note:  The Silvertips actually opened up the scoring with a power play goal about halfway through the period.  Naturally, my shot of it was blocked, which seemed to be one of the themes of the day for me (but more on that later).
Now we’ll move onto the second period…

And that’s it for photos from the second period!

What?  There are none from the middle part of the game?  Yeah, I noticed that, too.  I can’t tell you why, I just had a really bad game Sunday, which is too bad because the T-Birds played so well.  Anyway, to summarize the second period, Luke Lockhart evened the score at 1-1 with a powerplay goal 11 minutes in, and Marcel Noebels scored his first of the night just a minute after, also on a power play.

Anyways, for the third period I went to my normal spot between the benches, hoping to turn around my bad night and capture some photos of the T-Birds’ good one.  I did it, for the most part.  Check out some of what I got…

Goalie Calvin Pickard (bottom right) freezes the puck on his stomach while center Travis Toomey (right) tries to clear the puck before Everett right wing Parker Stanfield can put it in the net.

Left wing Chance Lund brings the puck from behind the Everett net early in the third period.

Possibly the most ironic part of that game (for me at least) was I got a photo that I really like on an otherwise lackluster night.  An Everett defender cleared the puck a bit into the period, and defenseman Ryan Button thought he had a chance at blocking the clearance, keeping the puck in Seattle’s attacking zone.  I managed to get a cool-looking photo of him falling to the ice and swinging for the puck.  He missed the puck but definitely earned his way onto the blog…

Defenseman Erik Bonsor skates up the ice with the puck.

And now that those are out of the way, let’s enter the Marcel Noebels portion of the night.  After the second goal (which came two minutes into the third period), I started to keep an eye out for him, knowing I’d need a good Noebels photo for the press release.  Here’s a nice portrait of him looking up ice at an Everett attacker.

And here’s Noebels’ third goal, an open-netter with four minutes to go. 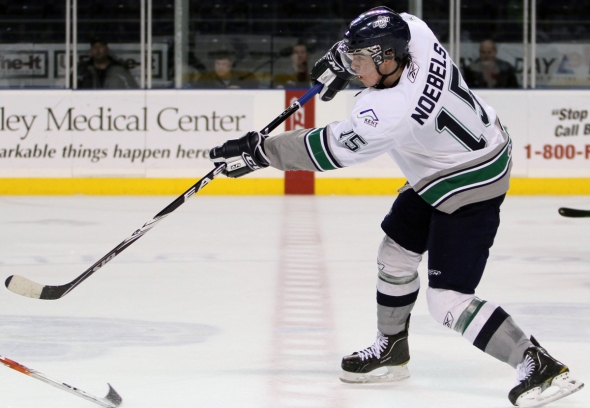 It’s a hat trick, the first of Noebel’s WHL career!   Coming back to the bench, he raised his stick with a big grin on his face in celebration…

With his hat trick in hand, Noebels wasn’t about to take a break, however.  Two minutes later, he added to his already terrific night and scored once more, making it four on the night and 25 on the season.  Here he celebrates with defenseman Austin Frank…

And Lockhart(right) joined in on the celebration with Frank (left) and Noebels(middle).  Note the big grin still isn’t off Noebels’ face.  In fact, I bet it’s still there, a whole 24 hours after the game… 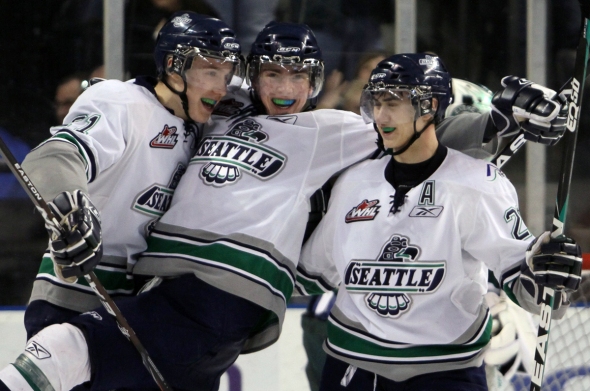 One more note:  Sorry for the lack of goal photos today.  It just so happens for three of my five goals, my view of the play was blocked by either a ref or a defender.  I can’t do much about it, although I really wish that hadn’t of happened Sunday night.  Oh well, that’s just the way it is…

Enough of the sad talk though, THE T-BIRDS WIN!  They keep their playoff hopes alive and are playing pretty good hockey right now, I recommend you get down to the ShoWare Center before the end of the year and get your hockey fix in!
Want to congratulate Noebels?  Want to commiserate with me about the horrible timing of referees and defenders?  Do so in the comments section below!