T-Birds’ fans, there’s just two weeks left in the season, but six games are yet to be played.  The T-Birds are just three points out of the last playoff spot in the western conference, making each game important.  One of the teams the T-Birds have a chance at passing for a playoff spot is their rivals from just up the road, the Everett Silvertips, and wouldn’t you know it, the ‘Tips came down to the ShoWare Center last Saturday…

The game started off great for the ‘Birds.  Not even a minute in, center Travis Toomey found himself in good position to give the T-Birds an early lead.  Unfortunately, his shot would hit the post and bounce away from the net…

And towards a group of other T-Birds, including defenseman Brenden Dillon, who would bury it in the back of the net for a Thunderbirds’ score!

Just a bit later, Toomey would tried to steal the puck away from Everett center Landon Ferraro while Ferraro was still in Seattle’s offensive zone.

The number of shots in the first period was pretty balanced: the Thunderbirds earned 13 shots on goal, while the Silvertips put 11 pucks on goalie Calvin Pickard.  Pickard stopped all but one of those shots, including this one here…

Center Luke Lockhart tries to redirect a puck into the Everett goal, but can’t get to it before Everett goalie Luke Siemens knocks it away from the net.

Center Brendan Rouse battles for the puck with Everett left wing Tyler Maxwell near the face-off circle in Seattle’s zone.

Nearly halfway through the period, the T-Birds found themselves on a power play after Everett right wing Cody Fowlie got called for tripping.  The power play had nearly been killed off until Toomey found himself in front of the Everett net while the puck was also heading towards goal… 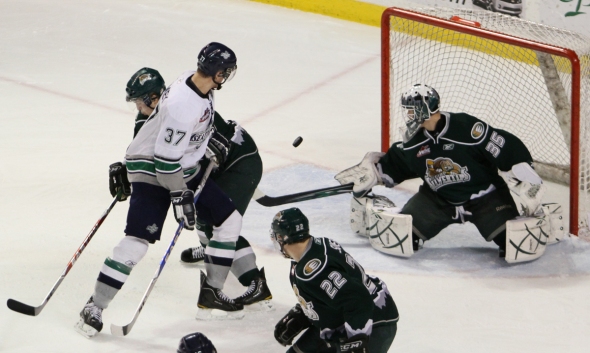 Toomey raised his stick and redirected the puck, having been originally shot by Rouse, into the net, giving Seattle a 2-1 lead they’d hold for the rest of the period. 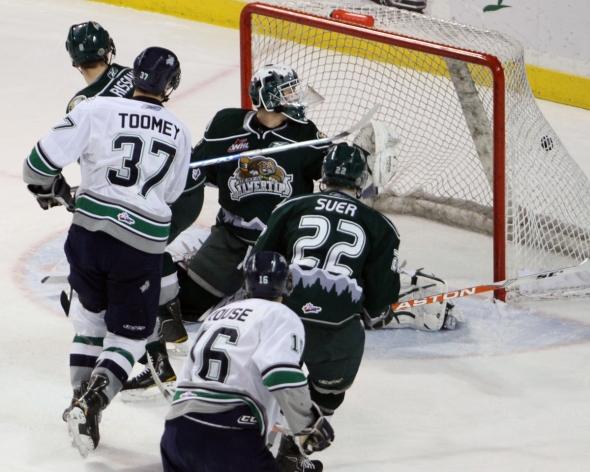 And now for the second period!  Instead of my spot behind the net the T-Birds shoot at, I sat in Calvin’s Corner in an attempt to find clearer glass and different photos than I’d been getting.  And get a different shot I did, as in this one it looks as though right wing Burke Gallimore is being held up by Everett defender Chad Suer instead of being knocked to the ice like you’d expect…

In the second period, the Thunderbirds again earned 13 shots on goal but couldn’t get anything past the red line.  Everett’s Siemens blocked all of them, including this one by Seattle right wing Marcel Noebels.

Toomey again found himself in front of the Everett net with a loose puck in the second period, but this time it was poke-checked away before he could put a stick on it for yet another scoring opportunity.

During the second period, Everett snuck one past Pickard to even the score at two-all.   There was also a minor scuffle between Dillon and an Everett player with just a few seconds left in the period, but no penalties or anything else resulted from it.  Tensions clearly weren’t worked out, though, as just seven seconds into the third period Dillon and Everett’s Ferraro dropped gloves and squared off against each other.  After a fairly one-sided beatdown by Dillon, the two fighters were sent to the penalty box for five minutes to cool off, but here’s a photo of the fight.

Center Luke Lockhart is upended after taking a shot on Everett’s Siemens in the third period. 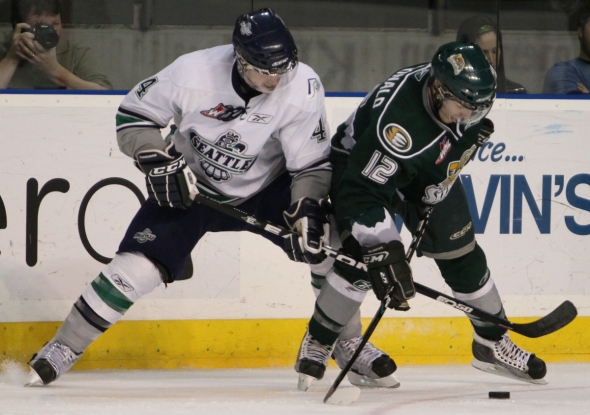 Lockhart takes Everett’s Ferraro down to the ice while defending him late in the third period.

During the period, Pickard faced nine more shots from the Everett attack and stopped all nine of them.  Unfortunately Seattle couldn’t get one past Siemens either (not one that wasn’t disallowed, anyway), so we headed into overtime, where Pickard was forced into action early…

Pickard makes a save in the beginning of the overtime period. 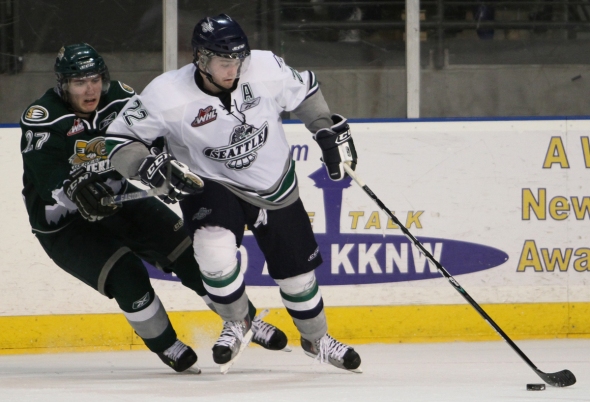 Gallimore protects the puck from Everett defender Ryan Murray during the overtime period. 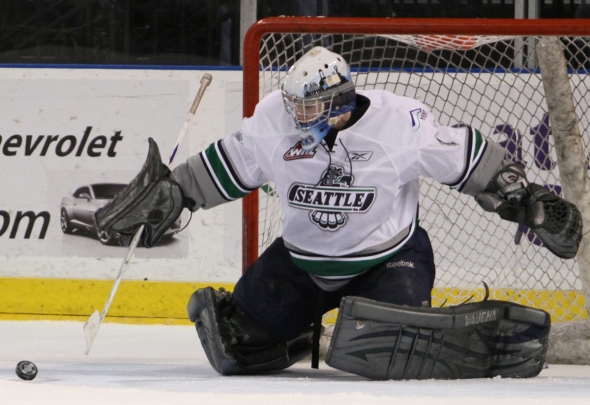 With just fifteen seconds before the shootout, Burke Gallimore found himself in space and with a decent angle on the goal.  Furthermore, Toomey was once again in front of the goal, looking to tip in a centering pass for the game winner.  With all this in mind, Gallimore wound up for a slapshot towards the goal… 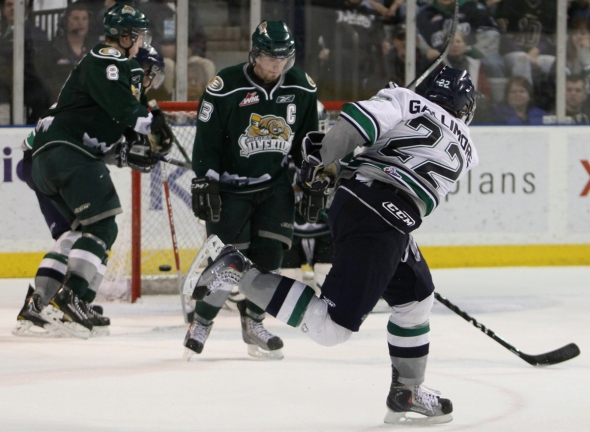 And unleashed a nice shot that didn’t need any help from Toomey, for it found an empty space to cross over the red line and win the game for Seattle!

What a shot! With just seconds before overtime, Burke Gallimore—who had missed the previous night’s game at Portland since he was back home attending the funeral of his grandfather—fired a great shot past the Everett defense and clinched two vital points in the playoff chase for the Thunderbirds… This deserves some celebration, no?

I got many photos of Gallimore celebrating, but I had a tough time deciding what one to go with for the press release.  You be the photographer: Let me know what one I should have gone with below in the comments section. 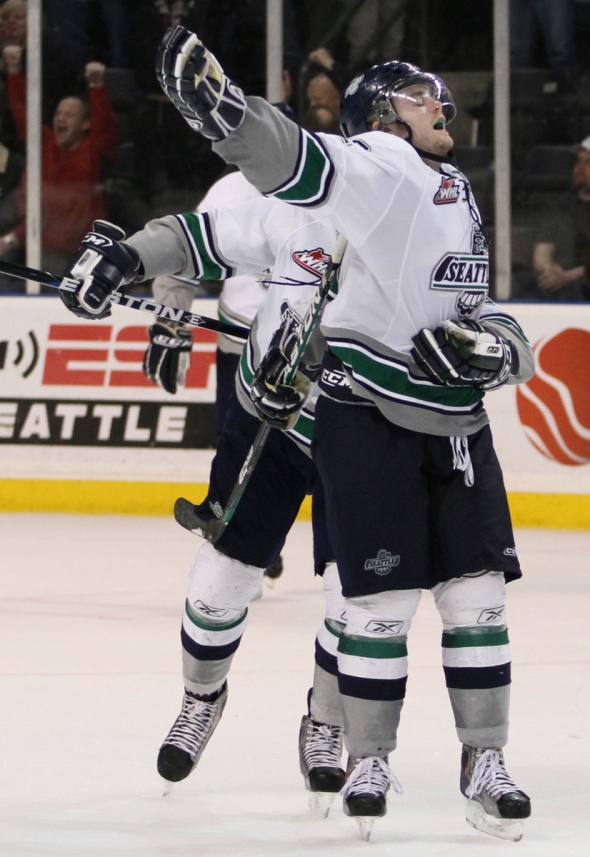 And the second one is a cropped version of the first, emphasizing Gallimore and eliminating some extraneous information…

The third one is the one I ended up using and is close to being one of my favorite shots I’ve taken this entire year.  It has many great qualities in it: Gallimore (who scored the game-winning goal) extending his arms wide and looking upwards; Dillon (who scored once and assisted Gallimore on the game-winner), and beautiful lighting around both their faces—there’s even a glint coming off Gallimore’s visor!  What’s wrong with it, though?  Only another terrible case of referees in the background ruining a shot.  Is that ref enough to ruin this image?  Let me know below!

And the fourth and final one is one I submitted to the WHL website.  It’s similar to the third photo, although Gallimore’s arms aren’t as extended anymore and his eyes are closed.  It’s past the peak moment, which I captured in the photo above, but it doesn’t have that ref in the background.  Tell me, is this better than celebration photo three?  Or either of the first two?

Alright, that’s it for this blog post!  Let me know your opinions about those celebration photos or any other picture I posted tonight, and I’ll see you Friday when the T-Birds take on Chilliwack in another crucial game in the playoff race!