T-Birds Give Grand Performance on Pink the Rink Night

The third weekend of the 2011-2012 season brought about two home games for the Thunderbirds, against the Prince Albert Raiders on Friday, Oct. 7, and the newest WHL team, the Victoria Royals (formerly of Chilliwack) the next day.   Since it’s freshest in my memory, why don’t we examine the game against Victoria first?

The game started off quickly, with the T-Birds scoring just one minute into the opening period.  I had just enough time to get situated and my camera settings set up before center Tyler Alos sent a centering pass into Justin Hickman, who calmly finished the scoring play.

Center Tyler Alos (right) centers the puck towards Justin Hickman (left), who sent it past Victoria goalie Braden Gamble for the first T-Birds goal of the night.

In case you didn’t notice in that last picture, yes, the ice was pink on Saturday.  It was “Pink the Rink Night” at the ShoWare Center to raise awareness of breast cancer and the ShoWare Center’s maintenance staff took that literally, putting chemicals in the ice to turn it pink.  I knew it would be a rare event and make for an interesting photo from above, so I focused on getting an action shot with an entirely pink background.  Just a few minutes into the game, I succeded…

Six minutes into the game, the Thunderbirds found themselves on a power play after Victoria’s Kade Pilton got called for roughing.  Just five seconds into the power play, Dave Sutter found himself in a great shooting position, and he promptly took advantage of it, scoring his first goal of the season… 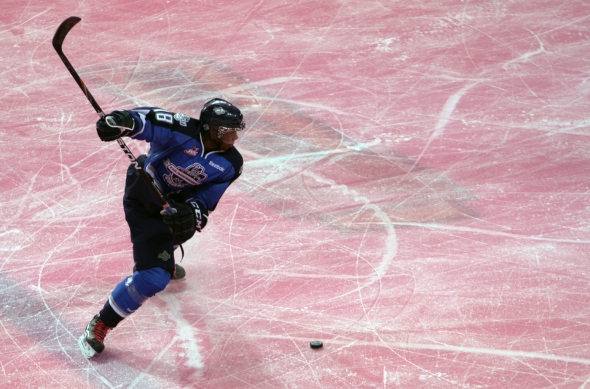 Defenseman Dave Sutter fires the puck past the Victoria goalie during a power play in the first period.

40 seconds later, the T-Birds added to their 2-1 lead with a goal by Mitch Elliot.  That goal was the T-Birds’ third of the game, which led to this interesting photo…

That’s right; the first three T-Birds goals came on three shots on goal, giving them a shooting percentage of 100% for over seven minutes of action.  I certainly haven’t seen that before in my hockey-watching days.

One of the (relatively) new players on defense is youngster Jared Hauf.  He played three games as an under-ager for the T-Birds last year, but I didn’t get any good photos of him.  My goal in the first five or so games of this new season was to get a couple decent photos all the new people to have some in case we need a photo of one of them.   Luckily, I got a nice photo of Hauf going down to the ice in order to keep Victoria center Kevin Sundher from shooting the puck into the Seattle goal.

Also playing a lot more is Connor Sanvido.  He got the start at left wing against Victoria, and worked his way into this blog post with this beauty of a photo…

Alos is upended before he can take a shot on Victoria goalie Keith Hamilton in the first period.

That’s it for first period photos, and the score was still set at 3-1 in favor of the Thunderbirds.   Onto the second period!

Left winger Mitch Elliot fires a shot towards the Victoria goal early in the second period.

Early in the second period, the T-Birds found themselves on the offensive, and Burke Gallimore had a great shot on goal.  It was knocked down by Hamilton, but it was awfully close to crossing the blue line for a score.  Burke thought it was in, and raised his stick in triumph…

Right winger Burke Gallimore raises his stick in triumph after a shot on goal.  The puck nearly crossed the line, but was saved just before counting as a score.

I thought center Luke Lockhart had a decent game on Saturday.  He assisted Sutter’s goal and he was constantly in the action all throughout the night.  He was also in front of my camera a lot, like he was for this shot on frame in the second period.

For his efforts in the game, Dave Sutter was named the second start of the game.  We already saw how he contributed on offense, now check out his defense as he fights to take the puck away from Victoria’s Rintoul.

In the second period, the Royals got one back, cutting the T-Birds’ lead to 3-2.  Now for some third period action!

A shot from left winger Chance Lund gets blocked by Victoria’s Hamilton early in the third period.

The story of the game was undoubtedly Branden Troock.  The right winger missed all of last year due to injury and played in just his second competitive game in two years Saturday night.  That didn’t stop him from scoring the last two goals for the Thunderbirds, including the game-winner.  Although I didn’t get a good shot of his first goal, I had a window to his celebration, which was just as good…

As I’m writing this blog, I’m realizing that Tyler Alos has been in a lot of photos so far.  So what’s one more? He deserves it…

Center Tyler Alos tries to get in front of Victoria’s Kade Pilton’s pass in the third period.

Sanvido hits the ice while trying to reach a puck in front of Victoria’s Pauls.

Lockhart gets tangled up with Victoria’s Sundher while they both dash for the puck.

These last three photos were evidence of how much Victoria pressed in the middle of the third period in an effort to tie up the game.  It worked, briefly, as they notched it up at four by scoring two third period goals.  That result wasn’t going to hold, though, if Branden Troock had anything to say about it…

Troock fires a shot past Victoria’s Hamilton after stealing the puck from a Victoria defender deep in the Victoria zone.

That goal put the T-Birds up 5-4, giving Troock something else to celebrate…

Troock celebrates his second goal of the game, one that gave the T-Birds the lead with three minutes left to play in regulation.

The last three minutes were more of Victoria pressing, having pulled the goalie for the last two minutes or so.  The T-Birds did well, though, and didn’t let Victoria score again.  They threw themselves in front of Victoria shots and battled for pucks.  It was a tough-fought three minutes, as evidenced by this photo of Hickman and Victoria left wing Jamie Crooks on the ground after they both scrambled for a loose puck.

Those three minutes ended with no other goals, and the Thunderbirds earned their first win of the year.  It was time to celebrate around goalie Calvin Pickard!

What a game!  It certainly was exciting at the end there, and it was nice to see the T-Birds win their first game for Coach Konowalchuk.  Also, it was great to see Troock play so well in just his second game since the 2009-2010 year.

Tell me what you thought of the game, or of the pictures, in the comments section below.