Road Trippin’ with the Thunderbirds

Hello again, T-Birds fans!  Kyle back with you, and I do apologize from being away from Bird Watching for a while.  School and work are keeping me quite busy and I haven’t had much time to work on this.  Today, however, was a light day, and I thought it would be good to put together a post in the middle of this Eastern swing the T-Birds are on.  Since they’re away from the ShoWare Center, let’s check out another away game.  Instead of going all the way to Calgary, let’s just head up I-5 to Everett…

I went to the Everett away game on October 21st (and yes, it feels like a while ago) to build up a stock of photos.  While also being treated to a great game—a hard-hitting rivalry game that the T-birds won—I was also treated to a good amount of strings, or a number of good photos in a row.  This  is due to the burst feature of my camera’s motor drive (it can take up to eight frames per second) and the fact that I abuse that feature all the time.  But since I’m not writing an ad for my 7D, I’ll get back on track to the hockey game.  I got a number of good bursts up in Everett, none better than this one of right winger Branden Troock checking Everett defenseman Evan Morden into the glass right in front of me.  And as you can tell by the end of this burst, I mean right in front of me… 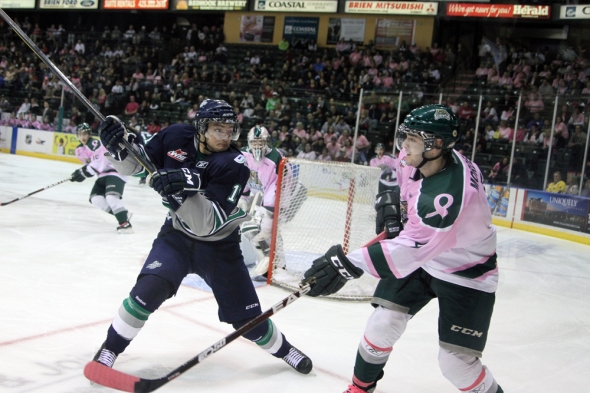 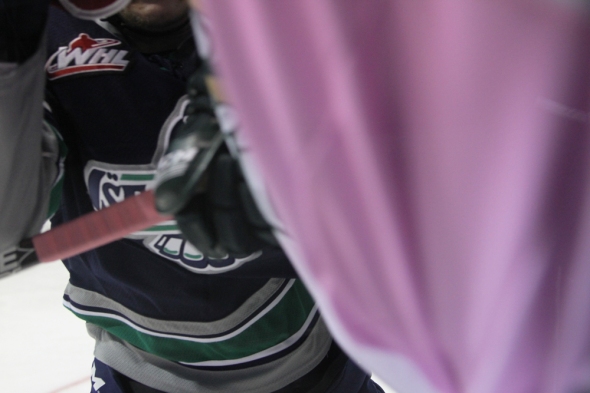 That last frame is an excellent example of how close the players get to me while I’m shooting from ice level.  It also makes me thankful for the wonder that is plexiglass—it does a remarkable job of keeping players in the rink and not crashing into me (except for that time last year when Jacob Doty checked a Kelowna Rockets player through the glass.  Whenever Doty’s on the ice, I do find myself backing away from the glass…).  Anyway, back to the game.  Right winger Marcel Noebels had a great day up in Everett, having  a hand in all three Thunderbirds’ goals and scoring two of them himself.  Early in the first period I had a two-shot strand of him taking a shot on goal.

Center Connor Sanvido got in on the action, taking a shot on Everett goalie Kent Simpson…

One more shot from the first period is this particular one.  I can’t quite put my finger on why I like it, but I do.  It’s of Noebels competing with Everett defenseman Nick Walters for a puck.  You can’t see the puck, but you can see the concentration in both players’ faces as they race for the puck…

During the second period, I shot from the upper level at Comcast Arena.  Comcast Arena’s second level has some pretty steep sightlines to the ice, much steeper than the top ring at ShoWare, allowing for a different angle than I’m used to.  I took advantage of the different look and got more than a couple nice-looking shots from above.

Defenseman Dave Sutter beats out Everett left winger Jordyn Boyd for the puck to begin the second period of action.

As said before, Noebels had two goals in game at Everett.  He easily could have had three, as this shot… 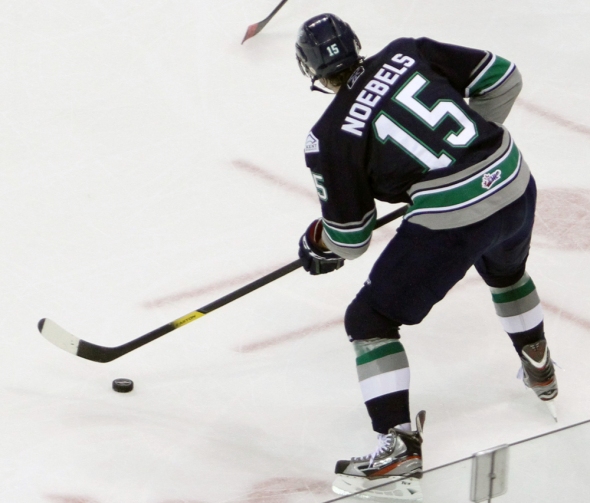 Hit the post.  Just an inch to the right and it would have been a goal. 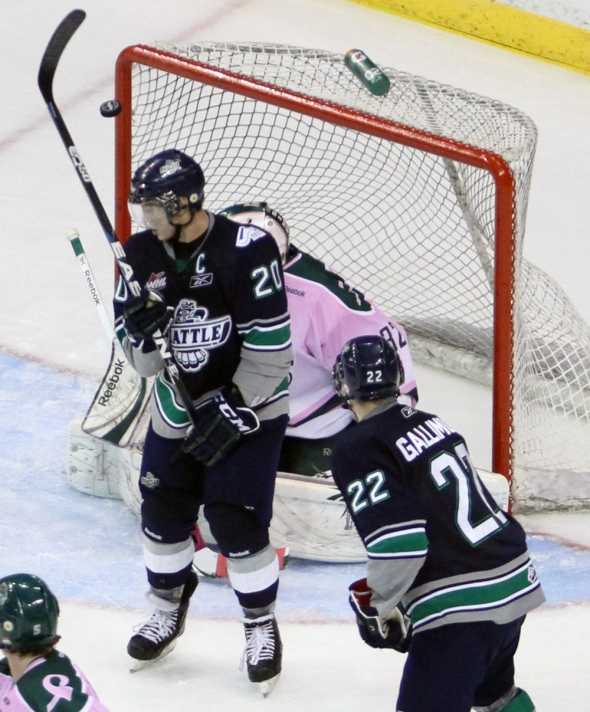 And here’s another shot of a Connor Sanvido shot.  Despite the fact that I had a pretty decent night photo-wise, I sure didn’t get photos of many players.  By the end of the post, I’ll just have photos of five different players by my count…

I’ve always wanted to get a good shot of a Thunderbird catching the puck at mid-ice and dropping it on the ice.  It’s been something I’ve wanted to capture for a while now, but so far haven’t been quick enough to actually get it yet.  I’m telling you this now not because I got that shot up in Everett, but because I got an even rarer shot—a Thunderbird catching his stick.  You heard me right, catching his stick. 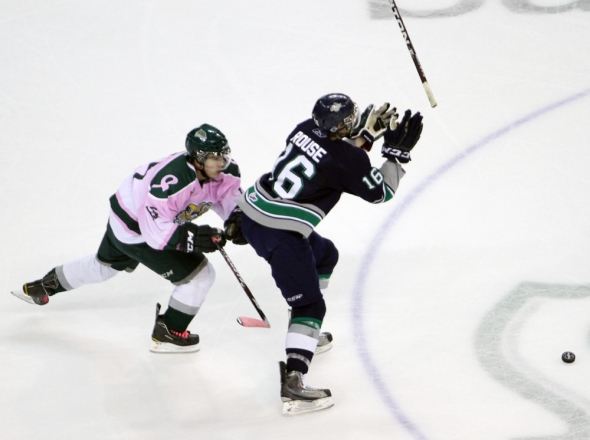 Center Brendan Rouse loses his stick while bringing the puck down the ice in the second period.

Center Brendan Rouse catches his stick while bringing the puck down the ice in the second period.

For our last photo, let’s jump ahead to the third period.  Four minutes into the period, right winger Burke Gallimore buried a shot past Kent Simpson to give the T-Birds a 3-2 lead.  In the celebration hug afterwards, the flock of Thunderbirds rotated so I couldn’t see Gallimore, but I had a clear view of the first star of the night: Marcel Noebels.

Noebels celebrates the game-winning goal with his teammates in the third period.

And that’s it for this edition of Bird Watching!  The Thunderbirds will finish their Eastern swing up tonight at 6 pacific time as they take on the Kootenay Ice.  You can check out the stats for that game at seattlethunderbirds.com or listen live at 710sports.com.  As for the blog, I may be back with a post before the next home game, Friday, November 18 (I do hope to get something up early next week, but we’ll see how school goes).  Thanks for bearing with my busy schedule and as always, let me know what you think in the comments section below.

Til next time, Go T-Birds!

This entry was posted on November 11, 2011 by tbirdsphoto. It was filed under Game Thread and was tagged with away, Branden Troock, Brendan Rouse, celebration, Connor Sanvido, Dave Sutter, Everett Silvertips, Marcel Noebels, win.