T-Birds Take out Royals in Shootout

Well this feels familiar!  Hello again, T-Birds fans, team photographer Kyle Scholzen back here with you after an unfortunately long absence.  Classes have ended for the quarter, though, and that means I actually have time to update this blog again!  I don’t know any better way to celebrate that fact than with photos from a T-Birds victory, this one coming in shootout form over the Royals…

Saturday’s game against Victoria was a roller-coaster ride of emotion.  The first two periods were great as the T-Birds took a 3-0 lead and we saw newcomer Connor Honey’s first WHL point and both Tyler Alos’ and  Colin Jacobs’ first goals of the season.  The third, though, brought about an ill-advised fighting major and game misconduct from Justin Hickman that gave Victoria a three-minute power play during which the Royals erased their three-goal deficit and evened the game up.  A back-and-forth overtime ended with the game still tied, bringing about a shootout that saw just one successful penalty shot, converted by none other than Colin Jacobs.  It was a fun game to cover, so let’s dive into the photos! 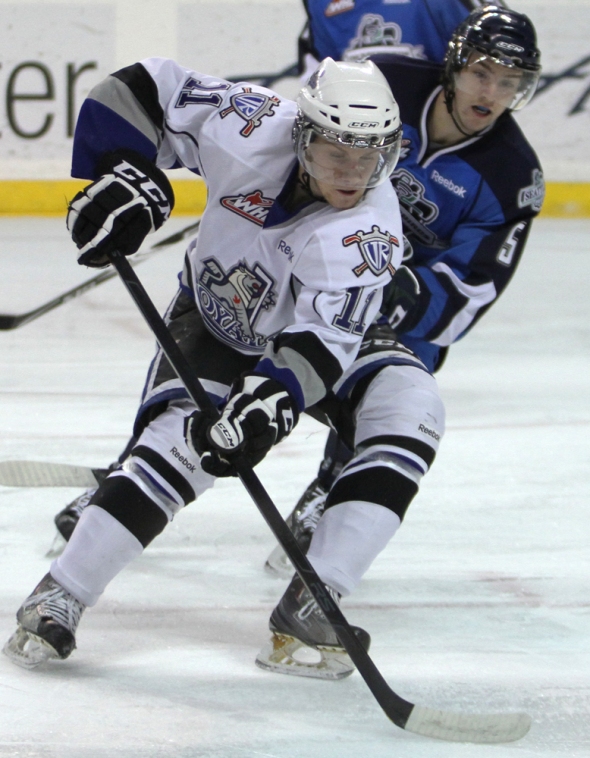 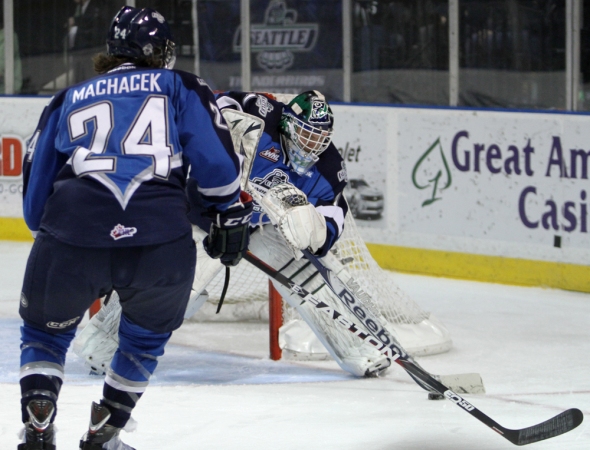 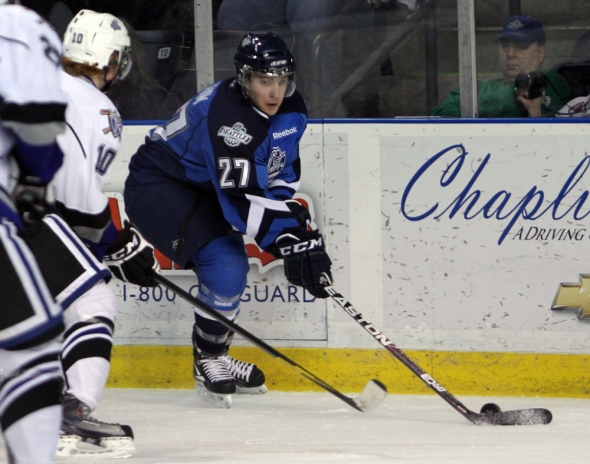 Aschim opened the scoring in the game with a well-placed blast from about 15 feet out.  That goal was his eighth of the season and drew a well-deserved celebration from Aschim… 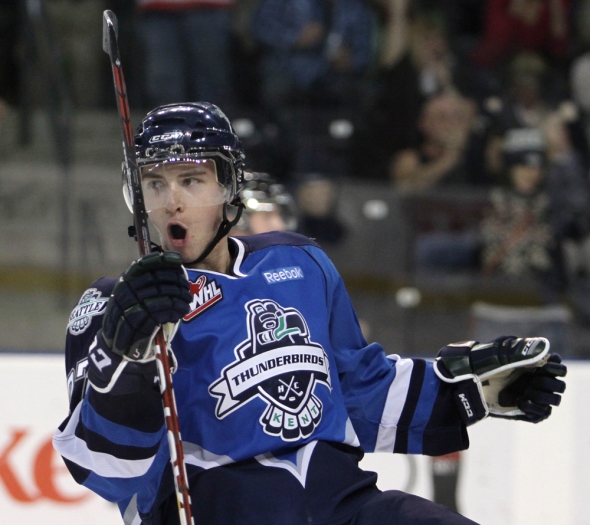 Aschim celebrates his opening goal late in the first period.

And to close out the period, let’s check out a shot on goal by right wing Tyler Alos, who would later get his first goal of the year in the second. 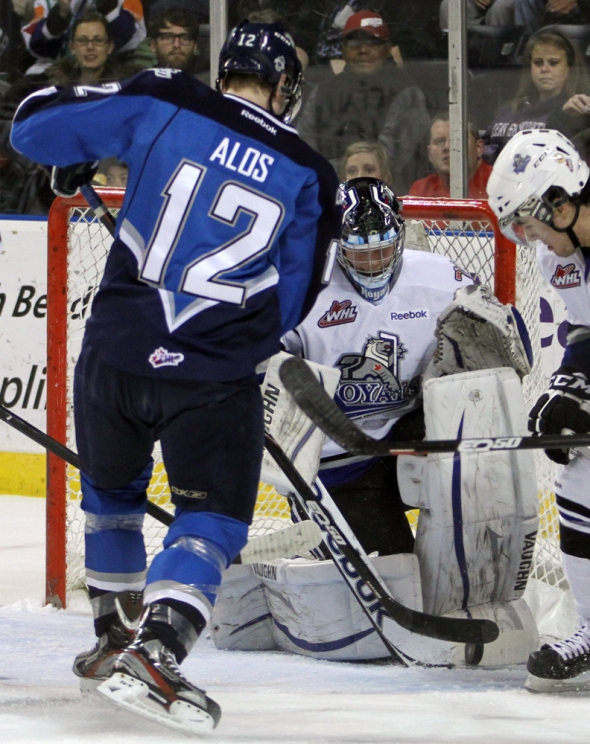 Right wing Tyler Alos tries to force a shot through Victoria goalie Keith Hamilton in the closing moments of the first period.

Aschim’s goal would be the difference between the two teams in the first period, and we now move onto the second, which brought on much the same style of play we saw in the first. Also, the T-Birds capitalized on the many opportunities they had to score, as they converted on two of the four power-play opportunities they had in the period.  For the first goal, Tyler Alos scored his first of the year, and Colin Jacobs also netted his season-opener eight minutes later.  Unfortunately my photos of those two plays didn’t turn out very clear, but I did get a decent shot of Luke Lockhart firing a centering pass towards goal during a power play…

Center Luke Lockhart centers the puck during the second period. 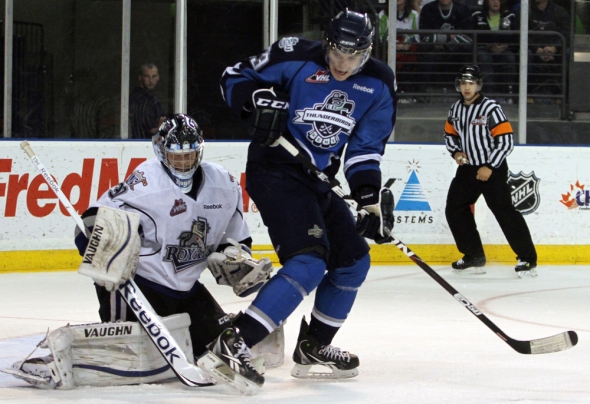 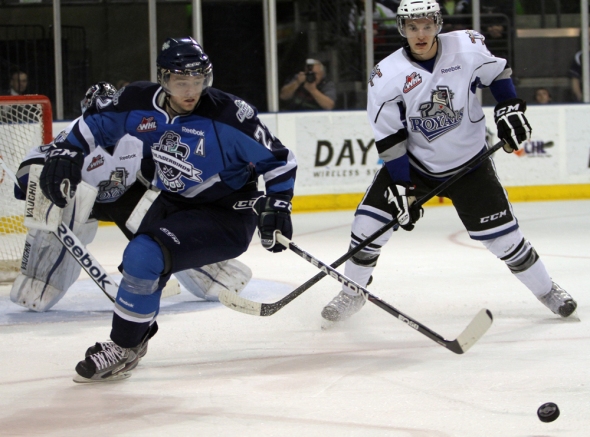 Right wing Burke Gallimore tries to collect a loose puck in front of the Victoria goal in the second period.

And that’s it for the second period, unfortunately.  Now onto the third! 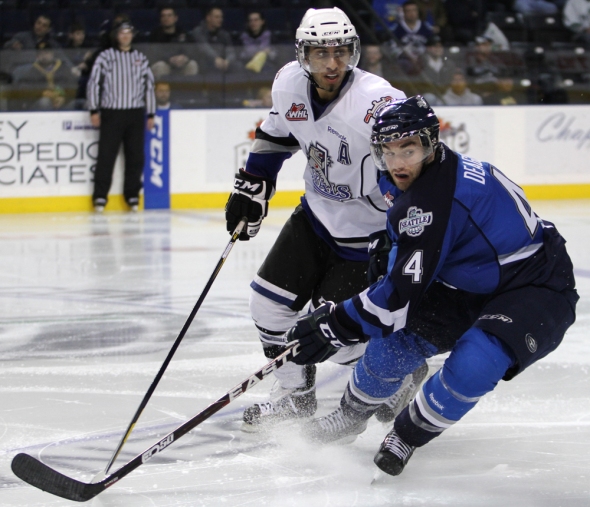 When I’m in the box between the benches, sometimes I feel like part of the game due to how close I am to the action.  I feel the rush of air whenever someone skates past right in front of me, I hear every word chirped at opposing players between the benches (which is the reason why I can’t take video from down there: this is a family blog of course), and I’ve even been sprayed with snow a time or two down there.   Sometimes I feel like such a part of the game it feels like players actually pass me the puck, which is what looks like is going on in this next photo… 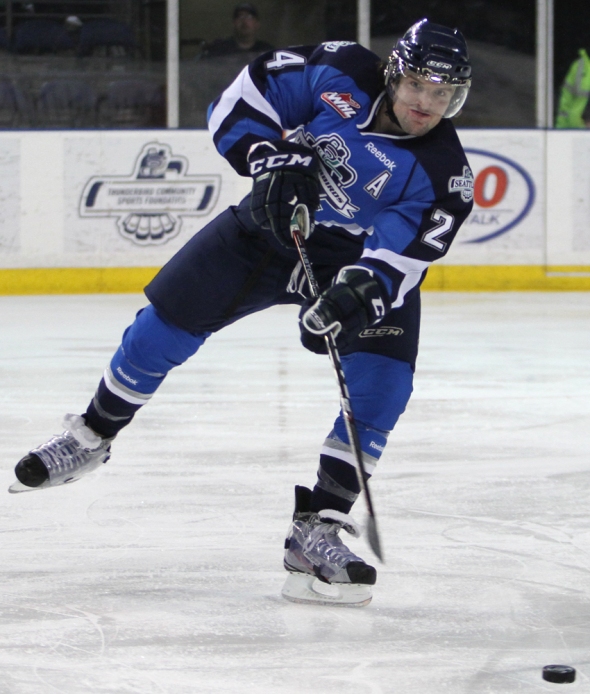 Defenseman Cason Machacek passes the puck back into the neutral zone during the third period.

Not even two minutes into the third, right wing Justin Hickman found himself with a five-minute major fighting penalty and a game misconduct for fighting Victoria left wing Zane Jones after Jones tripped a T-Bird.  While it was nice to see Hickman sticking up for his teammate, it was unfortunate that he earned a five-minute major as the Royals used the resulting three minute power play (after Jones’ tripping minor ended) to even the game back up.  Here is the second goal from Victoria on the night, a far shot that Chance Lund tried his best to block… 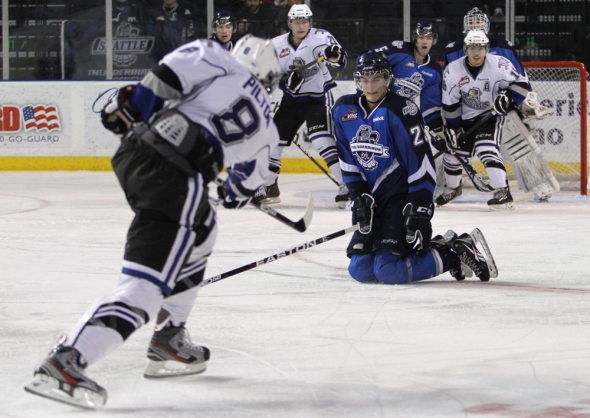 Lund tries, but can’t block a blast from Victoria defenseman Kade Pilton during a Victoria power play in the third period.

Right wing Connor Honey joined the T-Birds on Thursday, Dec. 8, and this last weekend of games was his first action as a T-Bird (although he attended Seattle’s preseason training camp).  Those two nights, I was tasked with getting photos of him and Jacobs (more from him later, obviously), and luckily they were seemingly right in front of my lens the entire night.  Here is Honey poke-checking the puck away from Victoria defenseman Jesse Pauls. 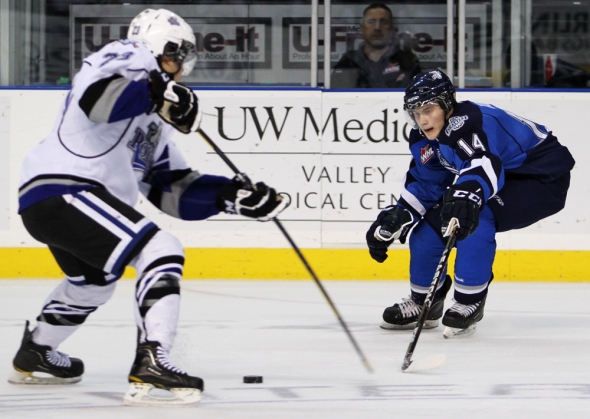 After Hickman’s penalty and the resulting power play, the T-Birds tried to score the game-winner, but were rebuked by Hamilton and the Victoria defense.  They’d have to settle for overtime, where they got three shots on target, including this one by Chance Lund. 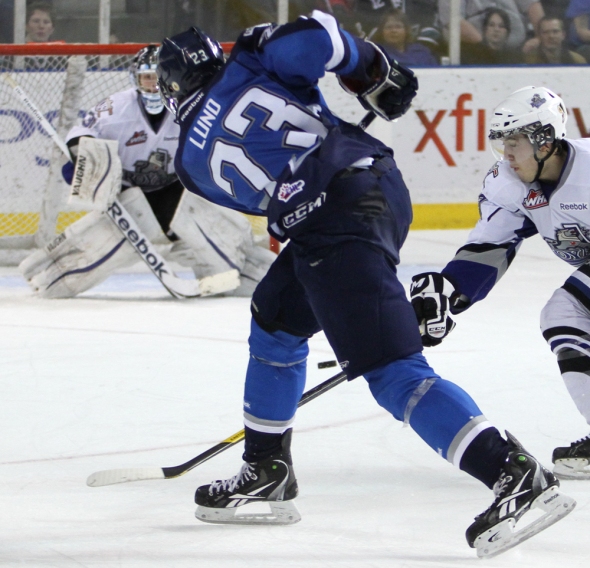 None of those three found the net, however, bringing about a shootout to determine what team got that second point.  Before the shootout, however, the teams rested on the bench while the zamboni smoothed the center of the ice and the two goal creases… 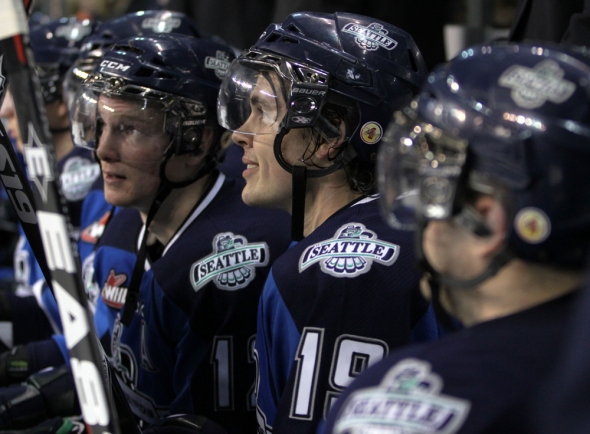 While waiting for the zamboni, Alos (left), Jacobs (middle), and Gallimore (right) sat together on the forwards’ side of the bench, chatting with Luke Lockhart (not pictured).

Once the ice was clear, it was time for the shootout!  Right wing Branden Troock took for the first shot, but missed.  After a Victoria miss, Gallimore took the second T-Birds penalty shot and also failed to convert.  Luckily, though, Calvin Pickard blocked Victoria’s second shot as well, taken by Kevin Sundher.

Up third for the T-Birds was none other than Colin Jacobs, making just his second start of the year after recovering from injury.  Having scored his first goal of the year earlier in the game, he was feeling fairly confident; at least confident enough to fire the puck past Victoria’s Keith Hamilton for a successful conversion. 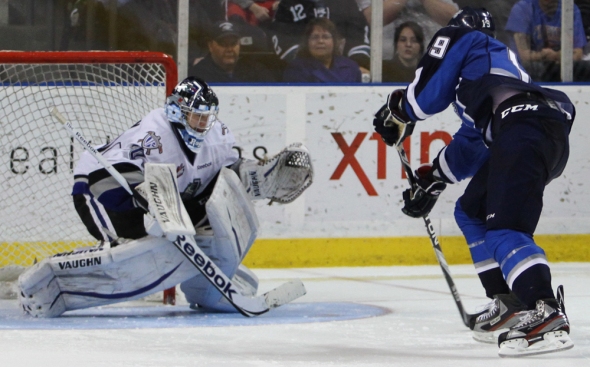 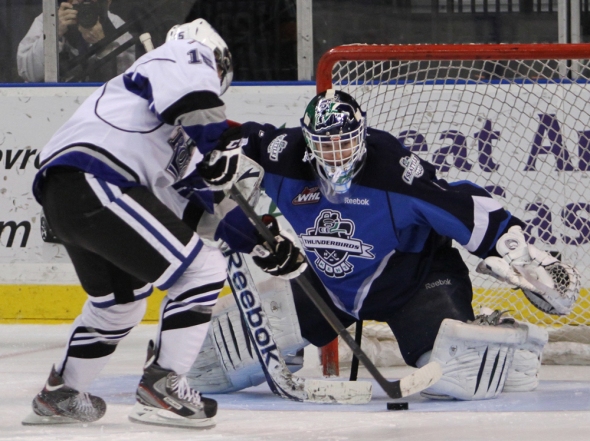 T-Birds win!  That means a pig-pile around Pickard! 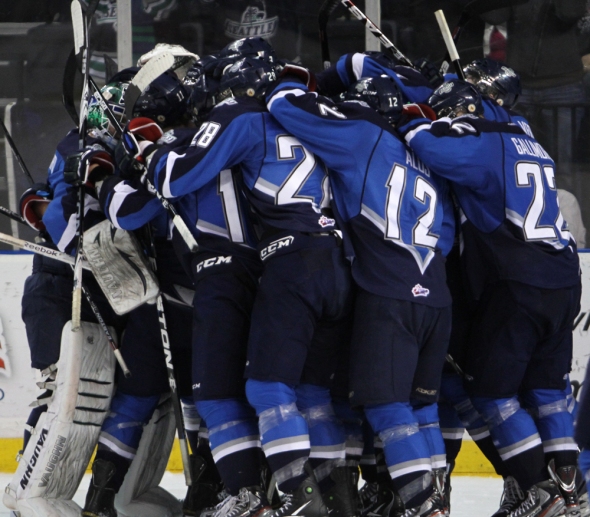 This win clearly excited the T-Birds, as you can tell from Alos’ and Jacobs’ reactions post-game.  Jacobs was named the game’s third star, and Alos earned first star honors for a goal and assist in the game. Here they are celebrating the win and two points with each other. 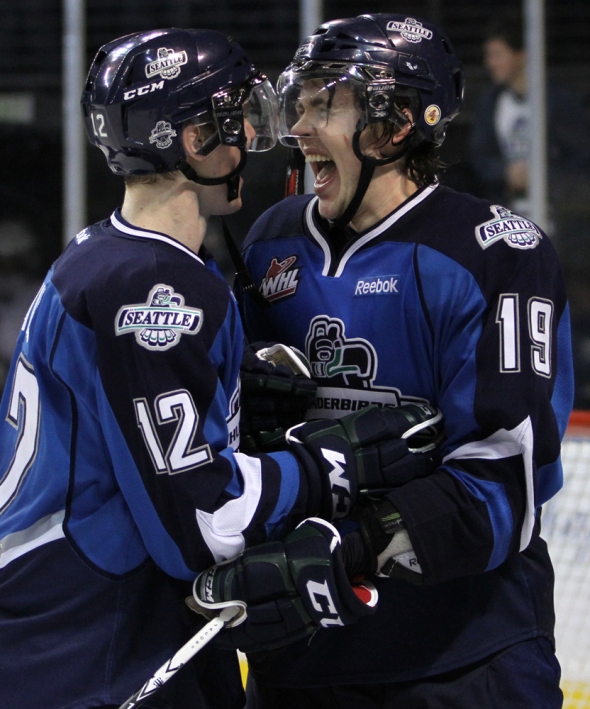 What a game!  What a two points!  That certainly was a fun way to come back to Bird Watching, now wasn’t it?  I should be able to post with more regularity, at least for the next three or so weeks, so keep checking back for new updates.  And as always, have a comment or question for me?  Let me know in the comments section below!

‘Til next time, Go T-Birds!