Sorry for the decreased activity on this blog recently, school and other ventures have really started to pick up for me lately and I just haven’t found time to put together a new post.  Alas, they will also keep me away from the game this Friday, December 2, and away from the blog for another week at least.  Maybe if we ask Brian nicely, he take my spot on the ice for me…

After next Tuesday, though, I’m not nearly as busy for the rest of the month, which means there’ll be time for me to play catch-up!

Alright, I’m slowly getting bogged down in games I haven’t posted photos from (I still have some to show you from the Everett game March 5), so bear with me while I play catch-up (which I’ll be doing for a bit after the season ends) on this blog.  Meanwhile, let’s celebrate a great 5-0 win over Kelowna with some photos from another great win: last Friday’s 3-2 overtime win over Chilliwack.

For a few weeks now, the Thunderbirds have huddled around Calvin’s goal just after coming onto the ice for the first period.  I’ve tried to get a good shot of them every game, but since the lights are out I haven’t had much luck; any photo is either to dark or has motion blur since I took it with a very slow shutter speed (which doesn’t freeze action well and creates motion blur).  Last Friday, however,  I got lucky when a spotlight moved across the huddle at the same time I released my shutter…

The Seattle Thunderbirds huddle up before their game against the Chilliwack Bruins on Friday, March 11, 2011. 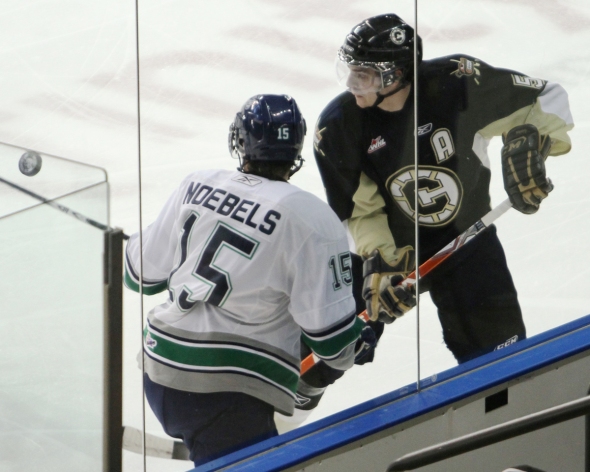 Throughout the course of the game, the Thunderbirds put an incredible 58 pucks on Chilliwack goalie Lucas Gore, and Gore stopped all but three of them.   Here he’s making a glove save on one of the 22 shots he faced in the first period, and to steal a baseball term sno-coning the puck with the glove (that means I timed my shutter right!)

Gore couldn’t keep that last save in his glove, however, and it fell loose in front of the net.  The puck eventually found its’ way to T-Birds’ center Tyler Alos, who saw a clear lane to the goal…

And fired the puck into the back of the net while skating past Chilliwack’s Gore. 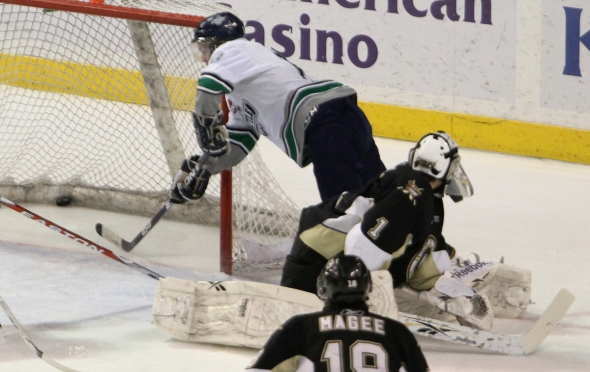 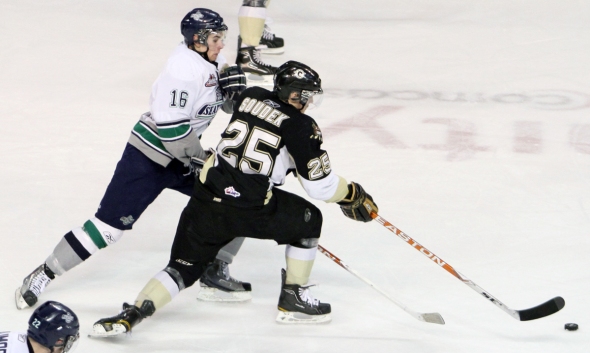 Chilliwack goalie Lucas Gore and defenseman Tyler Stahl can only watch as a Seattle shot crosses dangerously in front of the Chilliwack goal in the first period.

Recently one of the T-Birds’ communications interns commented how I haven’t submitted a photo of a hit for the press release at all this year.  I told him I never have too many good photos of hits, and ironically enough I got a few pretty good ones during the Chilliwack game, including these next two shots… 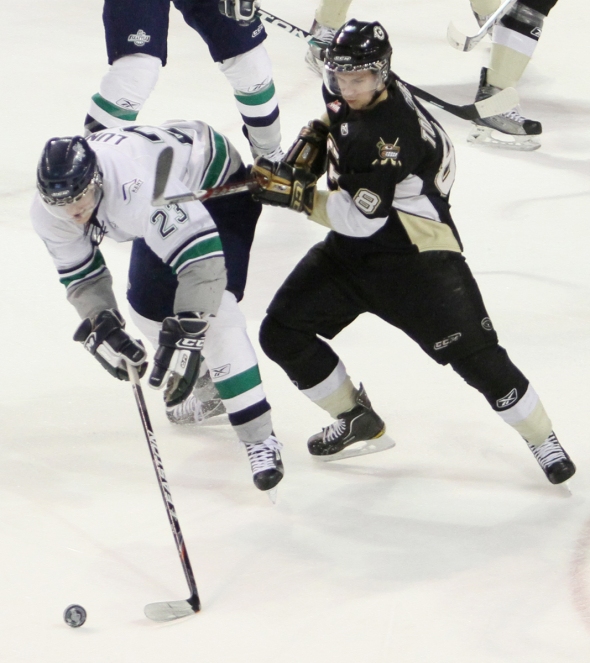 Center Chance Lund is pushed out of position to reach the puck by Chilliwack defenseman Mitch Topping.

Defenseman Erik Bonsor knocks Chilliwack’s Sundher to the ice in an attempt to take the puck away from the Bruins.

And to close out the photos from the first period, let’s see one of the few Chilliwack scoring chances in the first…

At the first intermission, the score was 2-1 Thunderbirds.  Colin Jacobs added another goal for the T-Birds with two and a half minutes left while Chilliwack opened the scoring with a power-play goal from Soudek halfway through the period.   For period two, let’s move down to just behind the Chilliwack net… 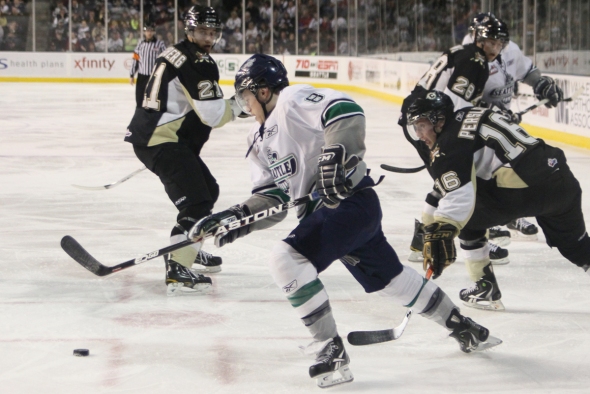 Center Connor Sanvido follows a loose puck towards the Chilliack goal in the second period.

Right Wing Burke Gallimore reaches to knock the puck away from Chilliwack’s Stahl, but doesn’t quite have the reach.

Center Luke Lockhart tries to find the loose puck and sweep it into the Chilliwack goal in the second period of play.

Unfortunately most of the rest of my second period photos had bad puck marks in them since the clean spot I found on the glass was ruined after a pile-up in front of me about halfway through the period.  So that does it for the second period, where Chilliwack evened the score at two all.  Onto the third period, where I took my typical spot amongst the players between the benches. ..

Travis Toomey seemed to be involved in most of the offensive action early in the third period.  I say that because the first four photos of the third period involve him, and they cover three different plays as well…

Center Travis Toomey tries to get through defenseman Brandon Manning and get into a good position in front of the Chilliwack net early in the first period.

Toomey sees a shot of his go slightly to the right of Chilliwack goalie Lucas Gore. 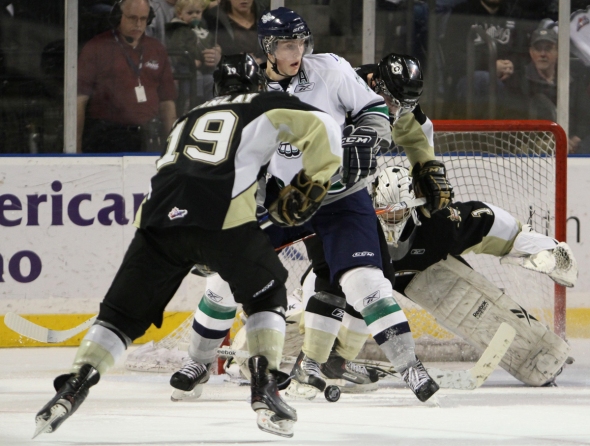 Toomey looks for a loose puck in front of the Chilliwack net after a T-Birds’ shot on goal was blocked. 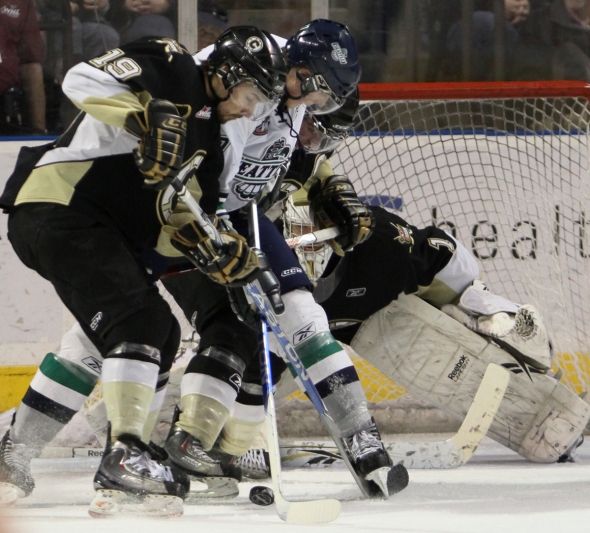 Toomey and Chilliwack right wing Dylan McKinlay battle for a loose puck in front of the Chilliwack goal.

Enough of Toomey for now, let’s check back in on Calvin, who’s now deflecting a shot from Chilliwack left wing Roman Horak. 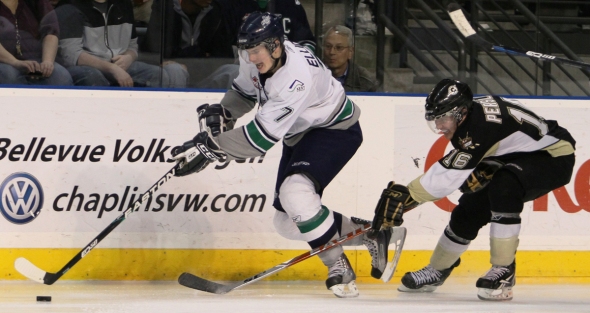 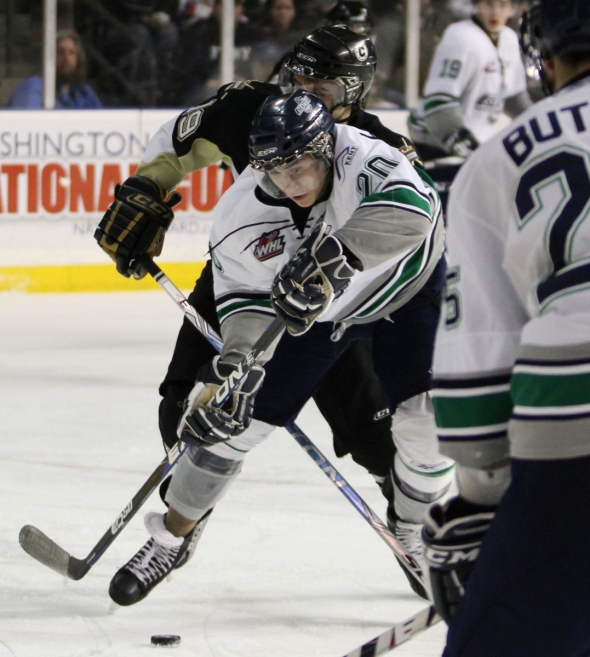 Luke Lockhart tries to stop a loose puck from leaving the Thunderbirds’ zone but is knocked down by Chilliwack right wing Dylen McKinlay.

In the last part of the third period, Pickard came up big with a couple of nice saves.  While Chilliwack still only got nine shots on goal in the period, the T-Birds found themselves playing in their defensive zone more than during the rest of the game.

Pickard uses his stick to block the net while watching a centering pass from Chilliwack slide on by in the third period.

Defenseman Travis Bobbee tries to poke check the puck away from Chilliwack’s Sundher.

Pickard scrambles back to cover the net while defenseman Brenden Dillon takes control of a puck heading for the Seattle goal late in the third period.

Now for overtime!  Since neither team scored in the third, we headed into the extra five minutes still tied at two.   Toomey tried to end the game early in the overtime period, however, when he tried to send a shot up over Gore’s leg pads, but the puck just didn’t get high enough.

A minute and a half into the overtime period, Gallimore again found himself in space to the right of the Chilliwack net.  Like the last game against the Silvertips, Gallimore wound up and fired a slapshot towards the goal, and like the last game the puck hit the back of the net.   Unfortunately I couldn’t swing my camera over to him in time to get the shot, but I did get the celebration of his second straight game-winning goal in overtime…

That shot earned Gallimore a hug from Toomey…

Also after the game, Pickard went over to Chillwack goalie Lucas Gore and congratulated him on his 55 save performance that earned him the first star of the game.   I thought that was pretty classy of Pickard, so let’s see a photo of it…

And that’s it for this post!  With just three games left in the season, the T-Birds are still in the playoff race.  They need points from each game—including two wins—and a little help from either Everett or Prince George to make it in, but with the way Seattle has been playing recently, I wouldn’t be shocked to see them in the playoffs.

Keep coming back here for photos of the final games of the season, T-Birds fans, and as always tell me what you think in the comments section below.

I hope to use this space to take you behind the scenes at T-Birds games and show you not only what happens on the ice, but what happens off it as well.  Over the course of the season you’ll see plenty of the bone-rattling checks, game-changing goals, and last-minute saves that you’d expect of a hockey photo blog, but also some of the things that go on beside the game.  Ever wonder what exactly goes into preparing the Showare Center for practice or a game?  How about what exactly the off-ice officials do throughout the game?  Throughout the next six months, I’ll be showing you that and more.  In fact, if there’s anything you’d particularly like to see in this blog, please let me know in the comments section.

At your service is new team photographer Kyle Scholzen.  I spent the last three years shooting for the University of Washington’s student newspaper, The Daily, where I shot plenty of Husky sports while getting my degree.   Although I’ve never shot hockey before, I look forward to learning the game and seeing what pictures I can come up with this season.  And I look forward to sharing what I find and what I learn with you all.  I hope you enjoy looking at this blog, as I’m sure I’ll enjoy making it.

A few shots from the home opener against the Winterhawks is coming up shortly.  Stay tuned for plenty of photos from the Seattle Thunderbirds 2010/2011 season!

Til next time, go T-Birds! 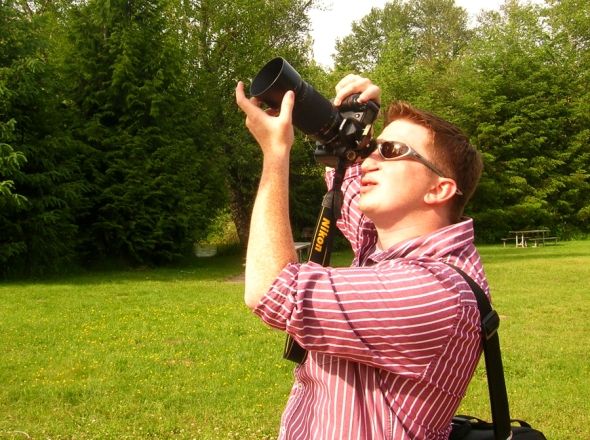 Here's me in action! Obviously not at a hockey game, though.