Monday night, 10:44 pm:  I’m writing this blog post in the dark, seeing as the wind storm that’s rolling through the area finally won its battle with the local power lines and my house lost power.  Not much from my preferred working environment has changed though; sure it’s a tad dark, but I can still type this up on my laptop, listen to music on my ipod (right know it’s Human by the Killers, in case you’re wondering), and still text friends and family on my cell phone.  It’s nice to know that even though I depend on electricity for so much, I can live without it (in short doses, though;  I’m SOL when my batteries run out).  Batteries are the fail-safe of today’s society, and they really should be appreciated more; they help keep everything running when the power goes out, and they have saved untold hardship and lives just because they’re a great fail-safe.

By now you’re probably thinking “this is a photoblog about a hockey team, why are you writing about batteries, Kyle?”  If so I don’t blame you, but trust me I’m heading somewhere with this…

Batteries are a lot like a goalie in hockey.  More specifically, batteries are like a reliable goalie in hockey, one who can be depended to immediately and effectively defend the net if something gets behind the defense, much like how batteries are called upon once the electricity stops flowing.  Since batteries have a near 100% effectiveness, this goalie has to be nearly perfect, saving 93 percent of the shots that come at him.  Hmm, a dependable, reliable goalie that saves nearly every shot taken on him? Why, that sounds a lot like our own Calvin Pickard, doesn’t it?

Say hi to the readers, Calvin!

As you may have just now guessed, this post is dedicated to our fearless netminder, the man who never met a shot he really liked and never met a puck he couldn’t stop. He backs up the Thunderbirds defensive line and is probably the best goalie in the WHL right now.  In fact, for the next two days he’ll represent the WHL in the Subway Super Series, two games that pits a team of WHL stars against a team of Russian junior stars. Since the Thunderbirds have a few well-earned days off after their eastern road trip (in which they did quite well, taking 8 of a possible 12 points) and Pickard is playing in the series, it seems like a great time to have a post saluting our never-stopping netminder. Here are 15 photos of Pickard doing what he does best: backing up the T-Birds and looking good while doing it…

Pickard stops a shot from a diving Lethbridge left winger Jacob Berglund during a game Oct. 1 against the Hurricanes. 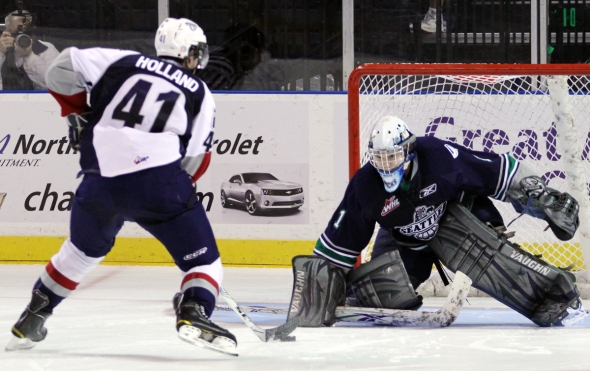 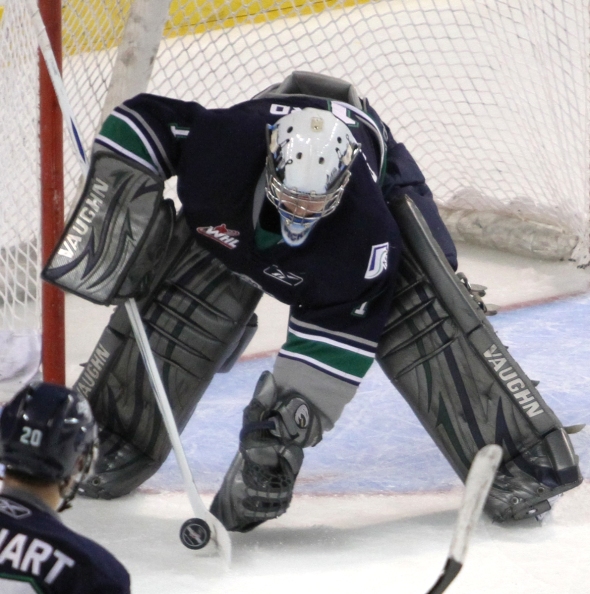 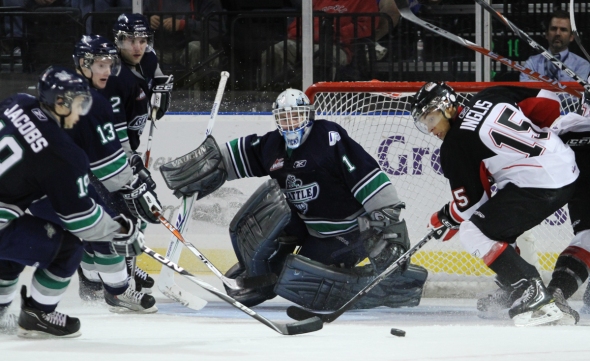 Pickard tracks the puck while center Colin Jacobs (left) and PG center Charles Inglis fight for it during the Oct. 29 game against the Cougars.

Pickard stretches out to make a save against Red Deer.

Pickard makes yet another stop against Red Deer.

See the previous cutline.  Just know that he made 46 saves that night.

Pickard makes another sprawling save against the Rebels on Nov. 2.

Pickard passes the puck to defenseman Dave Sutter during the third period of the game against the Rebels.

Pickard, Sutter (left) and Red Deer right winger Daulton Siwak (top right_ all have a nice view of the puck before Pickard falls on it for another save).

And let’s end this post the best way I know how: with a picture of Calvin celebrating a win!

Hopefully you enjoyed this look at Calvin Pickard, and be sure to tune in to the Subway Super Series against the top Russian junior players.