Figures that I have to use that incredibly witty  phrase of “Wheat Kings Rule” against the T-Birds instead of in favor. Seattle falls, 4-1 to Brandon

Second of all, Hi. This isn’t Kyle, it’s someone completely different. I’m Brian Liesse. I am the Washington Prep Sports guy for the T-Birds and I work and shoot alongside Kyle all the time. Kyle wasn’t able to shoot the Brandon – Seattle game on Tuesday so you get me. Just a note about me, I am not a hockey expert, so my post,  and maybe one or two more in the future, will be more of a layman’s perspective (if any perspective at all) of the game. Never fear though, I shoot football, basketball, baseball and so on so you’ll still get to see photos of the game around the same level of excellence you get from Kyle. So to jump right in…

The big thing about the game is that it was the rookie Daniel Cotton’s debut. He is the back-up goalie to Calvin Pickard. Cotton saved 45 of 48 shots in his debut. That’s pretty good, but it would have been nice to see him debut in a win. Here he is with the spotlight on him before the game. 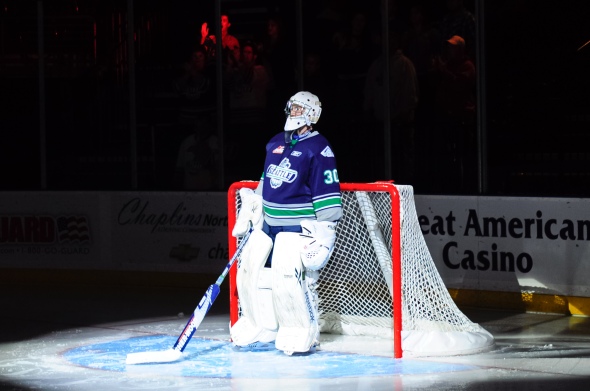 So there it is, my first photo up on this blog. And there is Cotton, standing in his spotlight looking all cool… bird… … … … forgive me, I’m new. So next is a shot early in the game, during one of Brandon’s first thrusts into T-Birds territory. Kyle Verdino does his best to guard the goal.

Again, I don’t know a lot about hockey so this is mainly me just showing photos. If it were baseball, WHOOOOONELLY would this be a long post, but it wasn’t baseball, so it’s not long at all. You might also be seeing another peculiarity about me is that don’t like to crop my photos out of ratio like Kyle does with his amazing work so all of these are going to be the same monotonous size, over and over again. Speaking of over and over again, this next one is of Dave Sutter. Now, I say this because I shoot Sutter more than anyone else. Whenever I am editing my photos, there he is, over and over again. So I figured that if he wants to be in my photos that much, I might as well post one.

Now it wouldn’t quite be a hockey game without a little aggression and the following is a photo of that aggression showing a bit. This was broken up pretty quickly, as you can see Mr. Smith is on his way there, but it wasn’t the last time tempers flared a bit during the game. 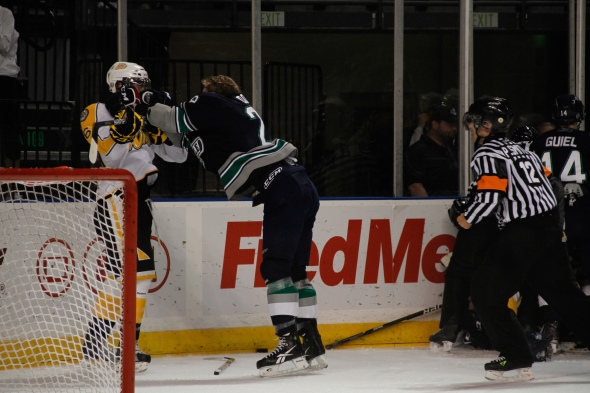 Next is a non-spotlight photo of Cotton. This time, he was blocking the goal during a Wheat King assault (it sounds like a battlefield doesn’t it?). As I said earlier, Cotton saved 45 of 48. He did a good job.

In contrast with the photo of Sutter, here is someone I rarely ever get in my photos, Marcel Nobels. Mr. Nobels was just sort of skating around in front of me during a time out in the second period and I figured I might as well shoot him while I can. Funnily enough though, we do see him again in this post. 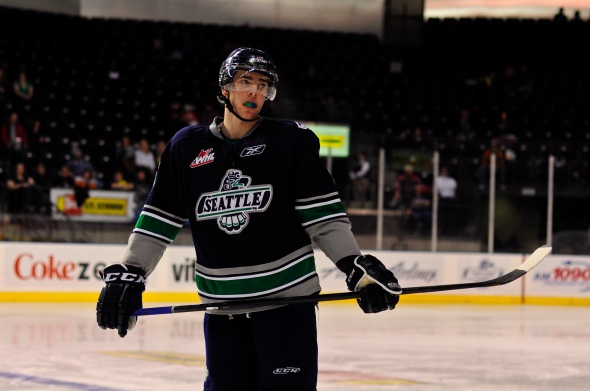 Well, that’s it. The suffering is over until the next time Kyle doesn’t make it. If you attend the games, you can see me on the ice before the game. I’m the young guy with long hair. I’m also running around a lot so it isn’t hard to find me.

Time for shameless self promotion. If you liked these photos, you can view the rest of them at http://blphoto.smugmug.com/Sports/Hockey/WHL-Hockey-Brandon-4-Seattle-1/19622475_HsNh8X#1537865330_5q7nqD6. I put the link in because I can’t figure out how to do that slideshow thing that Kyle does at the end of his posts. I put a lot of hockey photos up on that site so check back to see more if you’re interested.

So until next time guys, check back to see Kyle’s great photos, be sure to root on the T-Birds, and have a great weekend (or week depending on when you read this).

Hello again T-Birds fans!  Sorry for the long time between posts lately, I’ve been busy with Seattle U. photos and have been dealing with computer problems.  It’s all fixed now, however, so I do have time for a quick post about Edmont0n.  A word of warning, though; I was without a 70-200mm zoom lens for that game, so I had just my 28-75mm lens and couldn’t get many close-ups.  I did get some, however, and here they are… 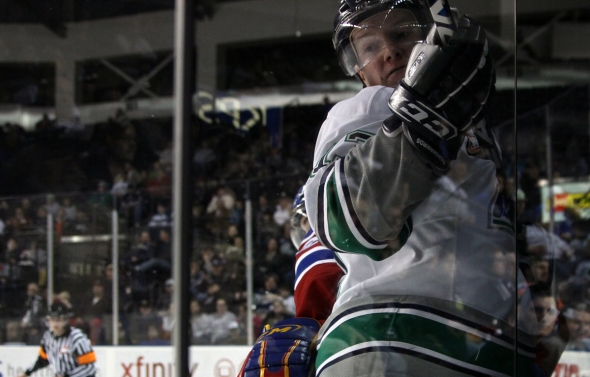 Center Tyler Alos is checked against the boards in the offensive zone of the ice.

Noebels passes to an off-screen teammate in front of the Edmonton goal. 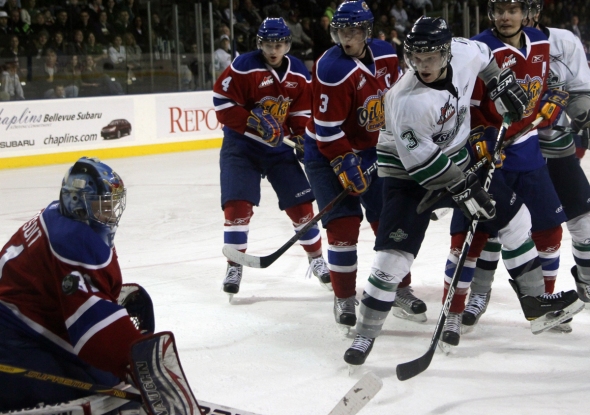 Alos takes a shot on Edmonton goalie Laurent Brossoit in the second period.

Noebels jostles for position to take the puck with Edmonton defenseman Mark Pysyk.

Center Luke Lockhart battles for control of the puck with an Edmonton player in the corner of the T-Birds’ attacking third. 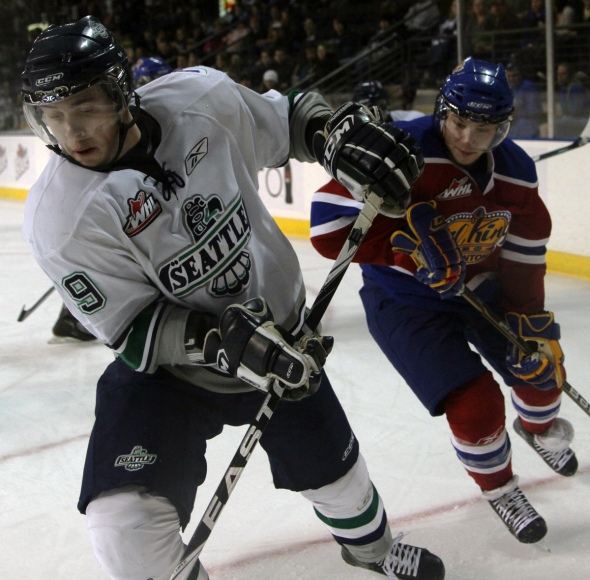 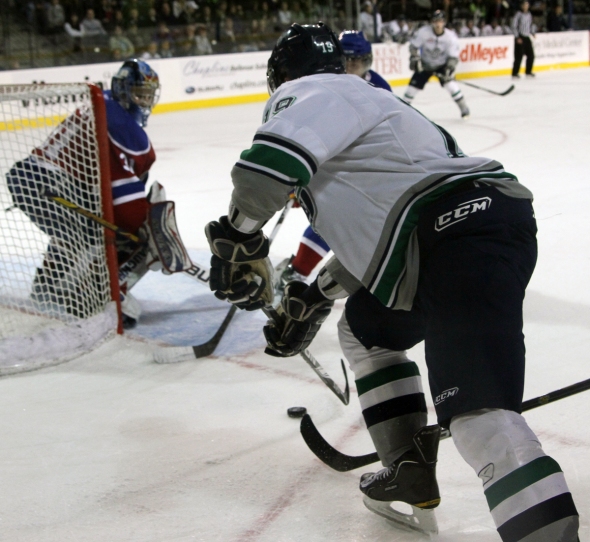 Jacobs tries to find a better angle for a shot on goal during the second period. 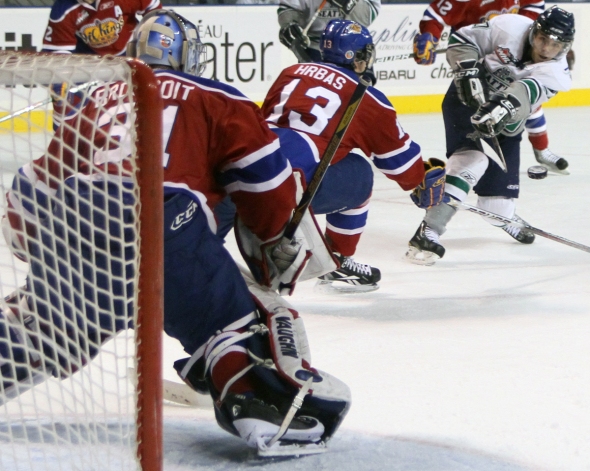 Defenseman Erik Fleming fires a shot towards the Edmonton goal.

Defenseman Mitch Spooner clears a puck from the T-Birds’ defensive zone in the third period.

Spooner eliminates an Edmonton attacker’s angle to the Seattle goal.

And here Spooner stops a shot aimed at the Thunderbirds’ goal.

Sorry for the small amount of photos, but at least now I know I shouldn’t use only a short-range lens to cover a complete game.  So I have that going for me…
Anyways, the T-Birds take on Portland tonight at 7 at the ShoWare Center.  Come on down to Kent and cheer on them on!