Recently I had the opportunity to travel out near Buckley to photograph a newly-born racehorse.  Why would I be talking about this on the Seattle Thunderbirds’ photoblog? Well it just so happens that the horse belongs to Dean Street, one of the T-Birds’ minority owners, and Street named the newly-arrived foal Cool Bird after our own mascot.  Cool Bird (the bird) heard this news and wanted to meet his namesake, and I, along with team videographer Nicholas Kocan and public and media relations director Ian Henry, was there to document this meeting of the Cool Birds…

Cool Bird (the horse) is living at Griffin Place out near Buckley.  After a car ride full of anticipation, Cool Bird (the bird) was excited to finally get to the stable and stretch his wings… 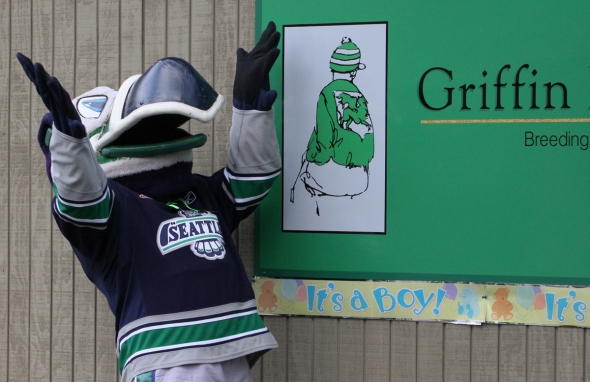 Then it was time to see the horses! 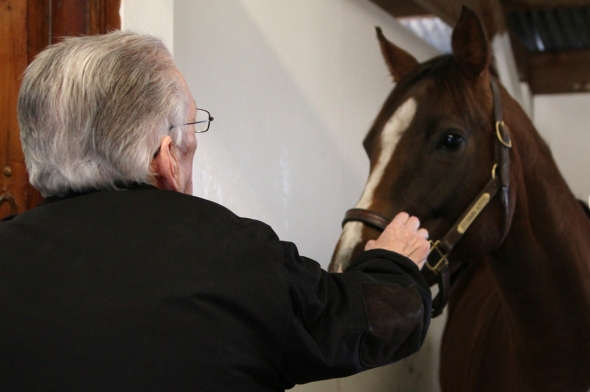 Dean Street, minority owner of the Seattle Thunderbirds, says hello to one of his horses and the dam (mother) to Cool Bird, Stormin Kitty.

After Cool Bird (the horse) got used to seeing Cool Bird (the bird)—after all, it’s not every day horses see a six-foot bird with fur—the gang headed out to the pasture to roam around for a bit. 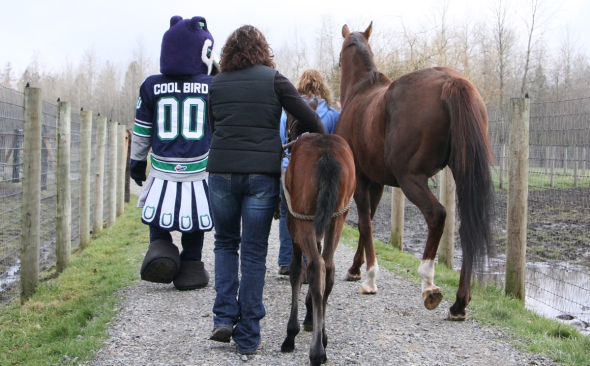 Once there, it was a great opportunity for Cool Bird (the horse) to stretch his legs… 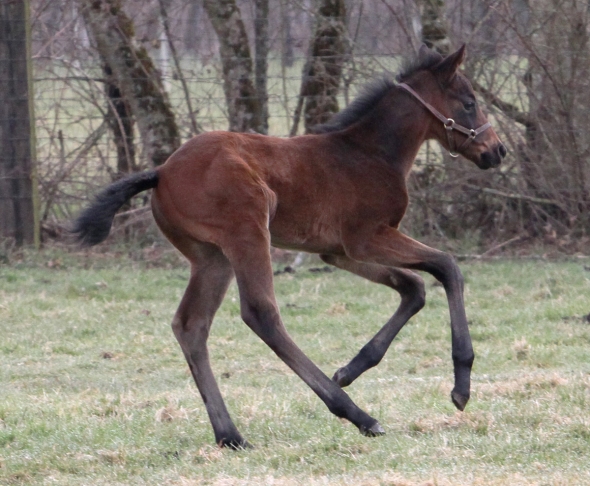 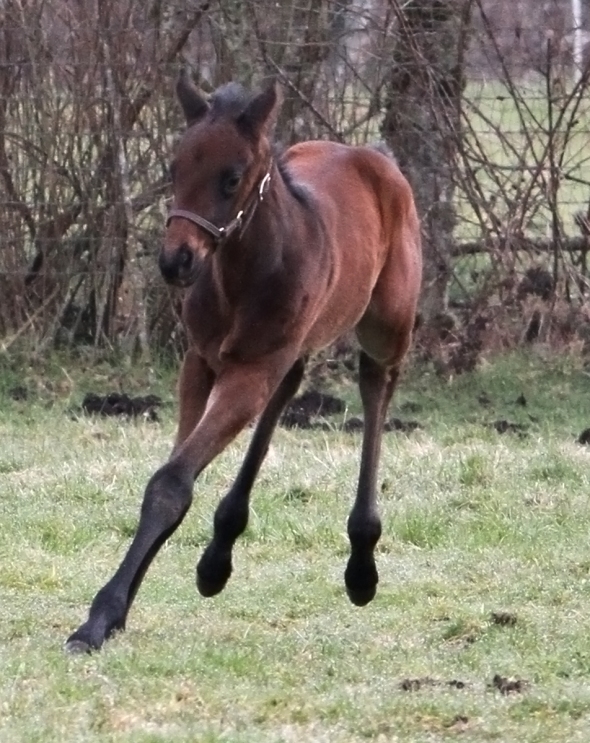 And once there, it was also a great opportunity for Cool Bird (the bird) to stretch his legs… 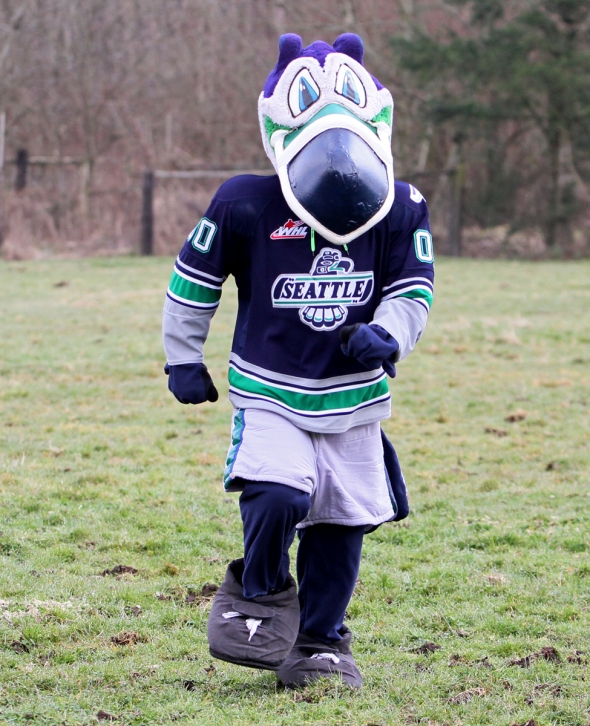 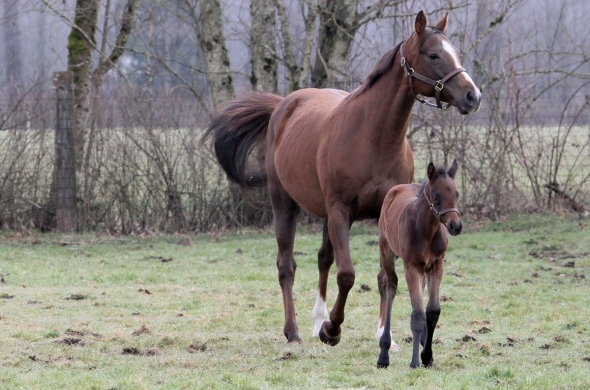 Cool Bird and his mother, Stormin Kitty, roam the pasture at the Griffin Place near Buckley.

After they were done stretching their legs, they were brought over to Cool Bird (the bird) so he could introduce himself… 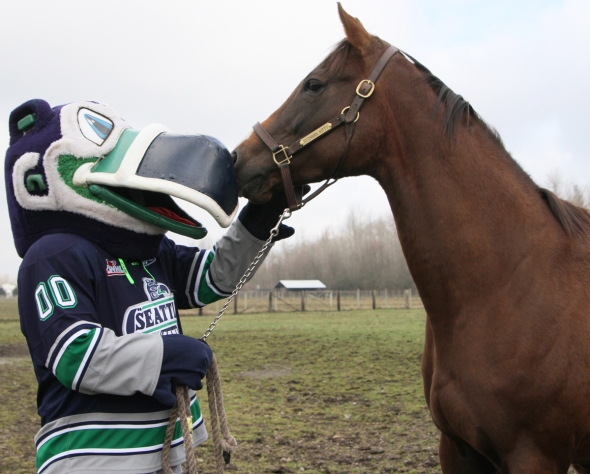 Cool Bird (the bird) finds himself beak-to-nose with Stormin Kitty, the dam (mother) of his racing horse namesake. 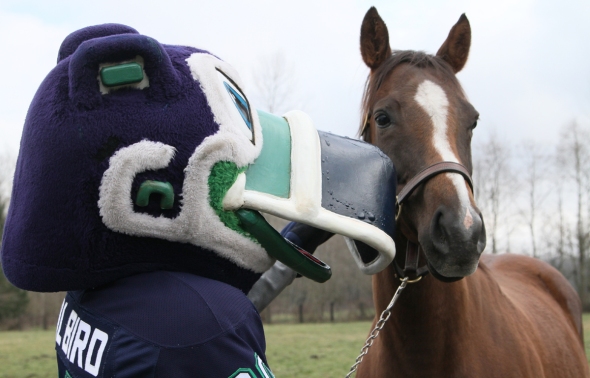 Next up, Cool Bird (the bird) attempted to feed the two horses carrots.  Stormin Kitty was very appreciative of the extra food, but Cool Bird (the horse) does not have teeth yet so could not eat the carrots. 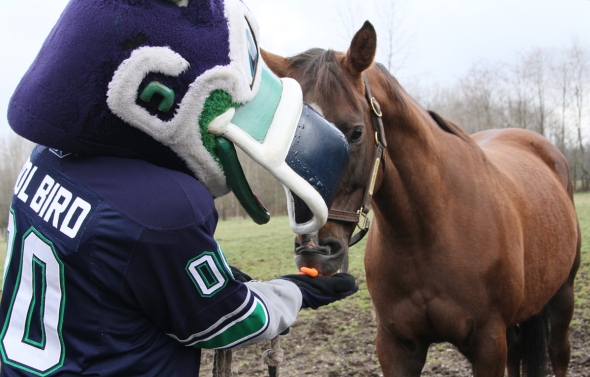 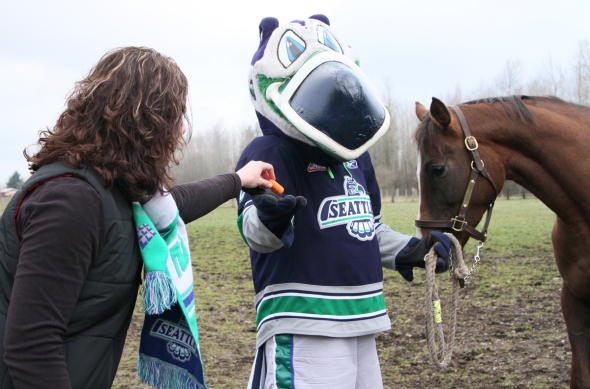 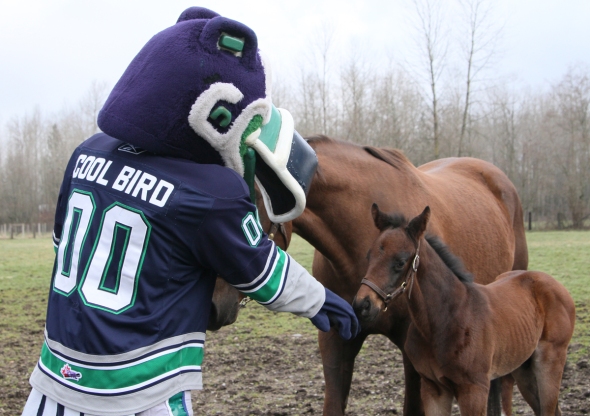 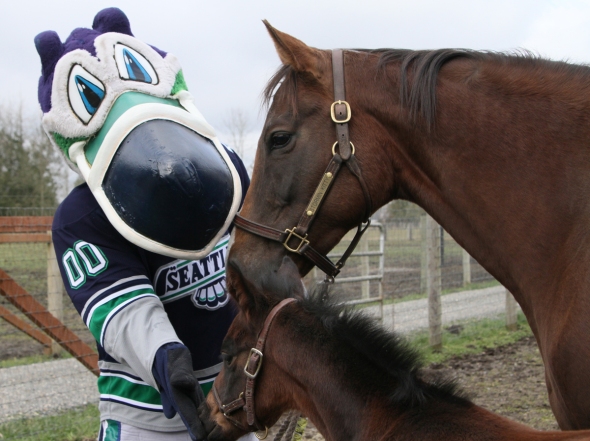 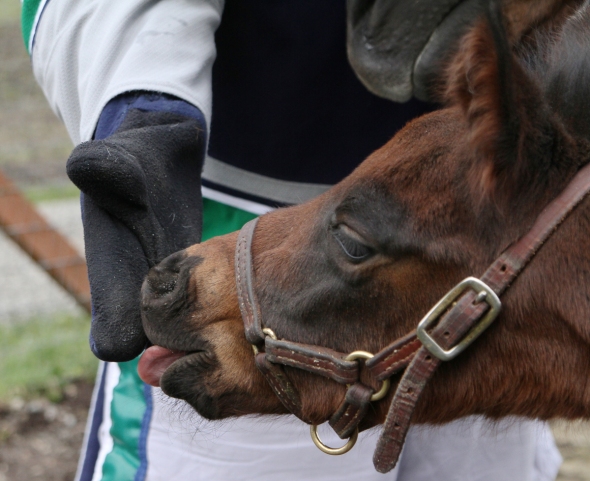 After the carrots and carrot taste were all gone, it was time to leave Cool Bird (the horse) and Stormin Kitty in the pasture while the human and avian members of the group returned to the stables.  Before that, though, Cool Bird (the bird) posed with Risa and Karen for some photos… 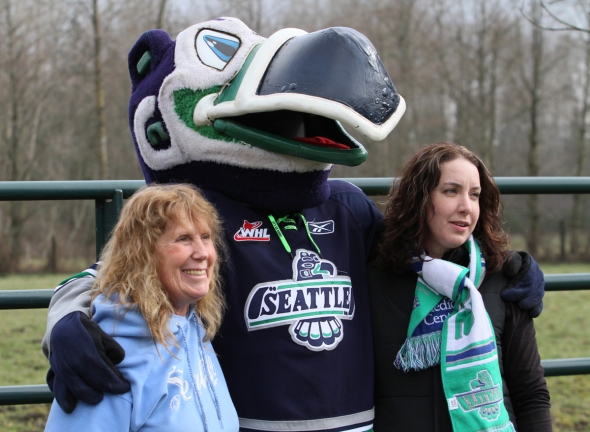 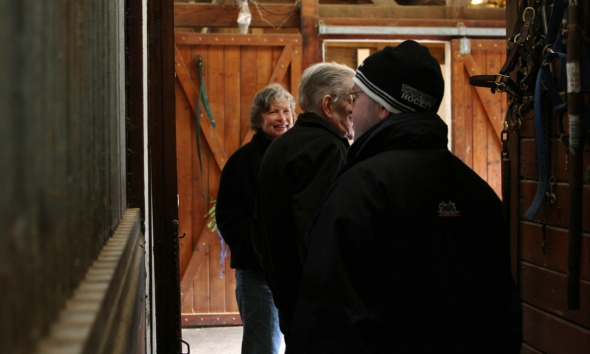 Public and Media Relations Director Ian Henry (right) inspects one of Dean Street’s other horses in the stables at Griffin Ranch.

And with that, our visit was over.  Cool Bird (the bird) had a great time meeting his namesake, and it showed while he was leaving the ranch… 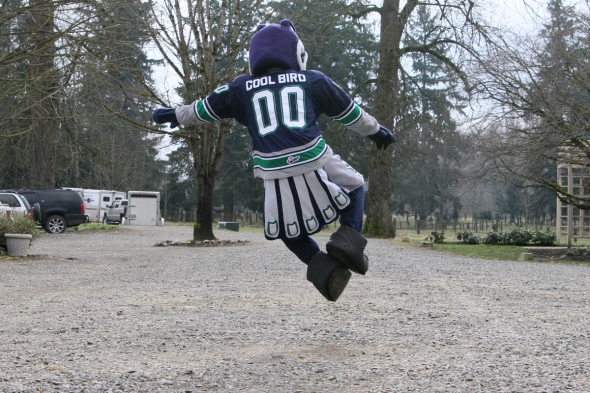 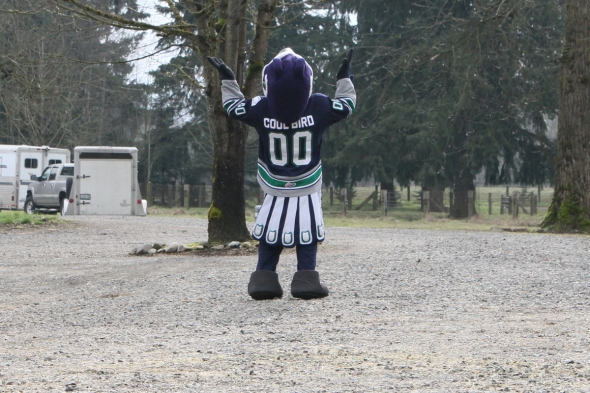 That concludes photos from our trip to Griffin Place to see the two Cool Birds interact with each other.  I look forward to seeing what Cool Bird (the horse) can do on the race track once he grows up.  He’s got great racing blood in him—his sire (father) was Grindstone, the 1996 Kentucky Derby winner, and Stormin Kitty (his mare, or mother) can trace her lineage to plenty of other great race horses, including a particular one named Secretariat.

Come to think of it, I think I want to see Cool Bird (the bird) on a race track too.  He showed he was pretty quick on his feet in the pasture earlier…

For our next post, we’ll check out some photos from the T-Birds’ overtime win over Chilliwack! 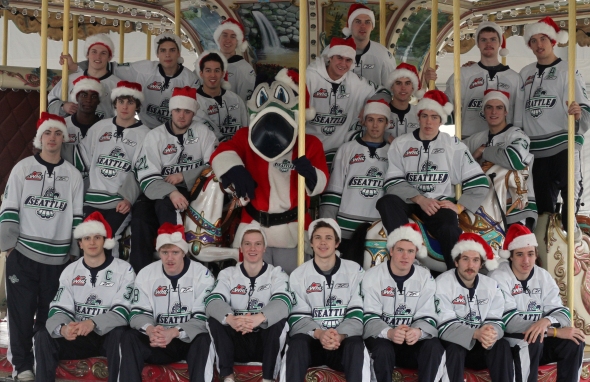 Hello again everyone!  I wanted to get a new post up before the games this weekend, but unfortunately I don’t have time to do a full post of 20+ game photos (it takes me upward of three hours to find the photos, edit them, type out an explanation, and post it all online).  So instead here’s a smaller post about the photo for the Thunderbirds’ Christmas card we’ll have for you all.

Last week I received an e-mail from Director of Media Relations Ian Henry asking me to shoot the card.  He told me the club wanted it shot at the Morford Family Holiday Carousel in downtown Kent, off 2nd Avenue and Harrison Street, so we checked out the location to make sure we could get a decent photo. 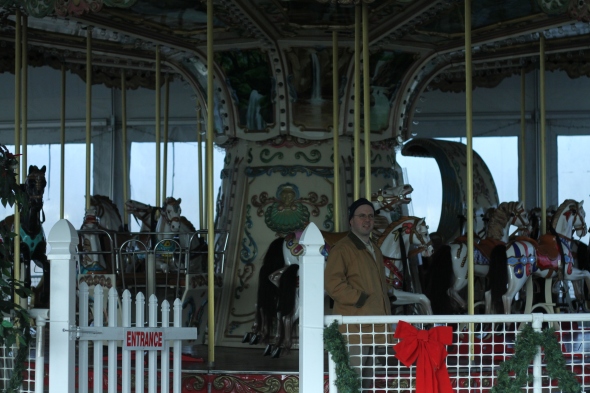 Director of Media Relations Ian Henry scopes out the Morford Family Holiday Carousel as a potential location for the T-Birds Christmas card photo.

(Note: I didn’t try to make this photo look good.  I just wanted a basic idea of what the background may look like.)

We came to the consensus that we could get a good photo as long as the fence along the front of the carousel was moved aside, allowing me to get a clear view of the players that’ll be in the front row.  With the location picked out, we were ready to go ahead with the shoot, scheduled for last Monday.

Finally Monday rolled around and I felt (somewhat) ready.  I had never shot a large team portrait before and I was kind of nervous since my ‘expertise’ is in sports and not portraiture.  Regardless of that fact, I knew I had to find a good exposure that A)allows a high-quality photo to blow up or edit (requiring a lower ISO) and B) will get as much in focus as possible (requiring a bigger aperture to give a larger depth of field).  So in my efforts to find the perfect exposure—and since my best photo assistant is in South Korea at the moment—I put on my camera’s 10 second timer and used a rather dashing model: myself. 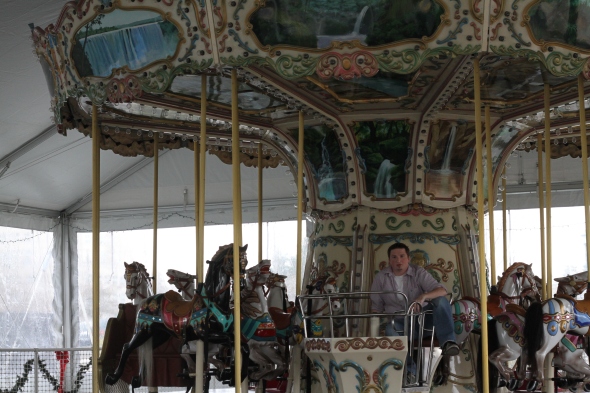 After a couple times running back and forth between the camera and the carousel, I began wishing for someone to help me out and be my test subject.  Luckily at that time, the Thunderbirds’ videographer Nicholas showed up and graciously allowed me to use him to test out some exposures and focal points.  I was also able to bounce ideas for the group’s pose off of him.  Thanks Nicholas! 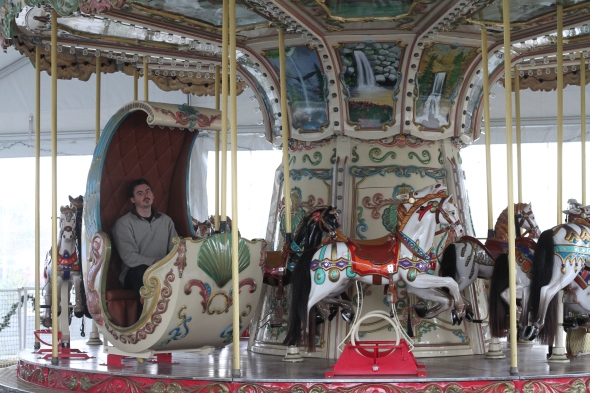 Just a bit after 1:30, the players started to arrive.  I gave them instructions on where they could and couldn’t stand and be seen by the camera and I largely just let them situate themselves in the beginning.  While they were doing that, I was adapting and perfecting my exposure. 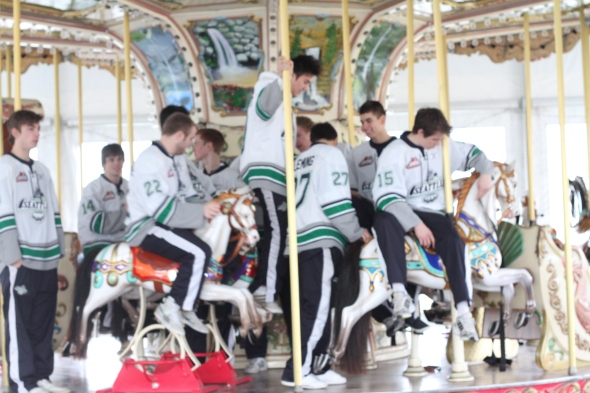 This was obviously out of focus (not worried about that yet), but also much too bright and didn’t have a great depth of field, so I increased the depth of field and the shutter speed and tried again… 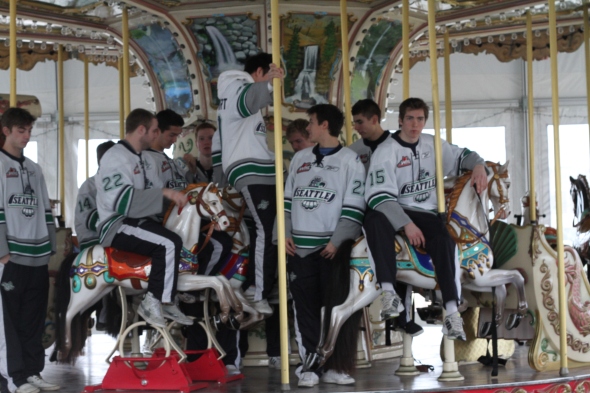 Within five minutes, most of the players and even Cool Bird had arrived.  After telling them what I was looking for, they all filled onto the carousel and I kept checking my exposure and focal point. 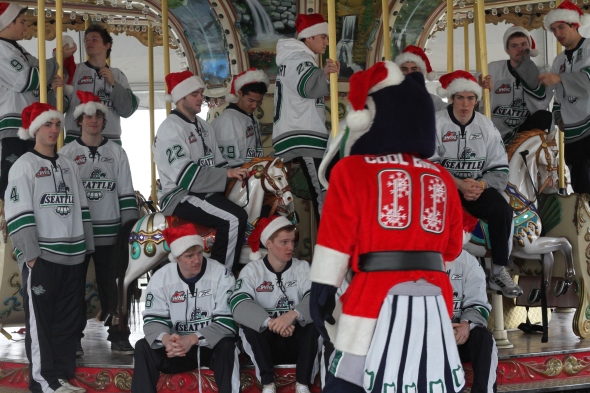 By now Ian had arrived with his assistant, Ashley, and they helped make sure everyone was there and get everyone situated to where they could see me and the camera.  Thanks for the help you two! 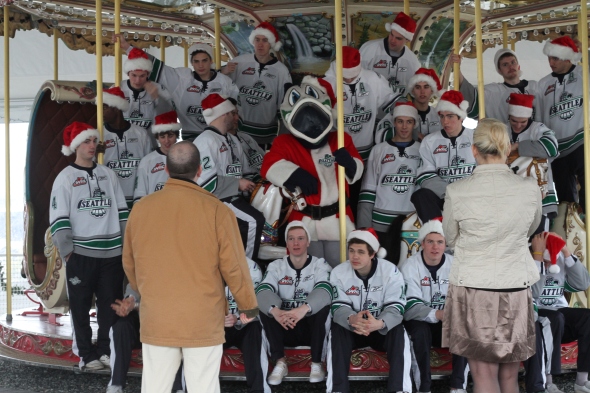 Finally we were off and running!  Here’s one of the better takes that we had, although I still think the photo I ran first in this post is the best. 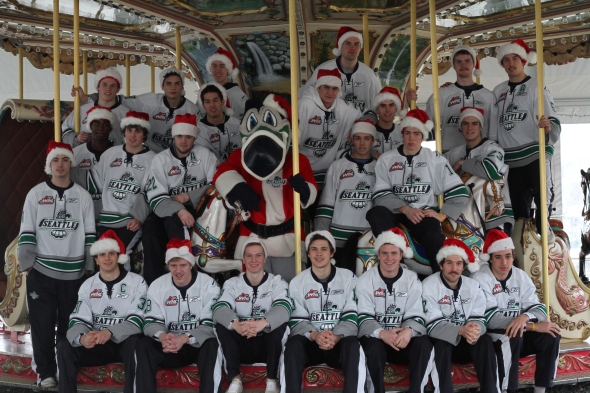 After getting a good string of photos from that, I (with the help of some of the guys) rotated the carousel to try and get a new background.  Unfortunately with 25 guys you can’t really see the horses or sleds they sat on, but it was worth a shot at something different.  For the record I actually did prefer the arrangement this rotation give, none of the photos taken from there came out very well, though.  Why, you ask?  Well I’ll show you… 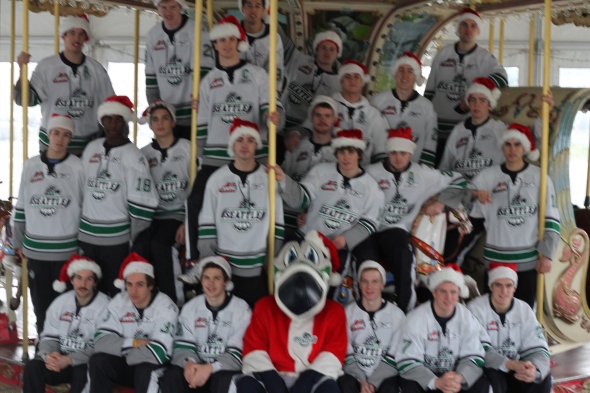 Looks blurry, huh?  Well I promise you I didn’t adjust the focus at all; the fuzziness of the photo comes completely from motion blur.  Any shutter speed slower than 1/60th is prone to motion blur, even if it’s on a tripod.  Well it just so happens that the one string of shots I took in this pose all had motion blur.  Some had a lot, like the previous photo, and some had a little like this next one… 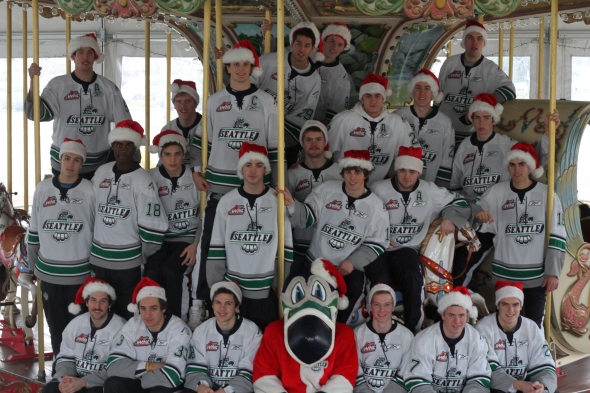 These last two photos were actually taken from atop a ladder, so I didn’t have the camera on a tripod like I did earlier.  That last photo actually looks pretty good for handholding the camera at that slow a shutter speed.  Unfortunately, however, I didn’t notice the bottom edge of my frame; I cut off the hands of most of the bottom row. This is a massive failure on my part, but luckily I was covered by the decent shots I had on the previous pose.

Since Ian and I thought we had enough photos to ensure a good one, we decided that we were done with the shoot.  The guys returned to the ShoWare Center for practice, and I packed up my gear, thankful that my first major team portrait didn’t result in complete failure.

I’d also like to send out a special thanks to the city of Kent for allowing us to shoot at the carousel.  It was a good venue for the Christmas photo and I encourage you all to ride the carousel on Friday afternoons and weekends when it’s opened.  It’s free to ride, although they do accept and encourage donations.  Also, another thank you goes out to Victoria Andrew for many things, including having the fence moved, being there for the whole shoot, and putting up with my requests.  We couldn’t have done it without you Victoria!

Stay tuned to this post.  I’ll try to get a link up to Nicholas’ video from the shoot (where you’ll see me ordering the players around.  I can’t believe someone as small as me can direct so many hockey players around…).  I’ll also try to get a photo of the card up on the blog as well…

And stay tuned to the blog in general because in my next post, we’re all taking a road trip! Yay!

Til then, go T-Birds!

EDIT:  Here’s a link to  that video Nicholas made of the shoot.  It’s a great vid, so check it out!  Thanks for making it Nicholas!