Greetings again, T-Birds fans! I’ve finally found a bit of time so why don’t I revisit the Thunderbirds’ home opener against Portland last Saturday? Does that sound like a good idea to you guys? Well I certainly hope so.

As with the two other home openers I’ve seen, the T-Birds hosted a Party on the Plaza before the game started. There was a bouncy castle for the younger fans, a beer garden for the older ones, and face painting for everyone, along with other booths. Since you can’t really go wrong with a photo of kids having fun on bouncy castles, I headed there first and waited for a photo opportunity to arise. It didn’t take long for me to get this gem…

A young fan gets assistance in departing a bouncy castle at the Party at the Plaza outside the ShoWacre Center.

As mentioned before, there was a face painter outside available to paint the logo of a certain hockey team on the body of anyone who wished to employ her services.

Defenseman Jesse Forsberg rushes onto his new home ice while being introduced to the Seattle crowd. Forsberg came over from Prince George in August.

Surprisingly and a bit to my dismay, I didn’t catch any laser or flare in my lens, which would have made those photos stand out from the other introductions. Nevertheless, I found a nice way to make a good, somewhat unique photo during introductions by shooting without the aid of the spotlight. Here’s what I’m talking about… 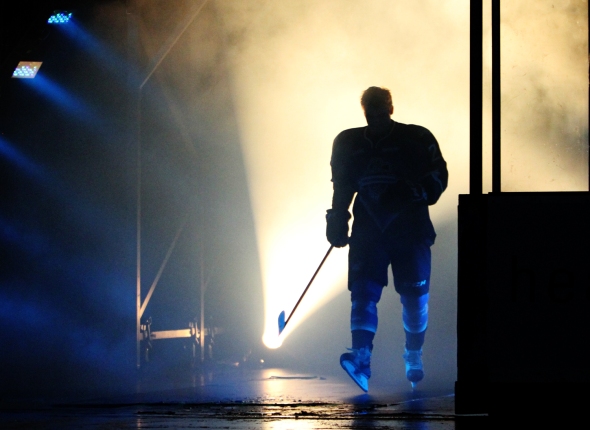 Left wing Alexander Delnov, from Moscow, Russia, is introduced for the first time to Thunderbirds fans.

While the pregame festivities were great to watch and everything, the main draw of the night was (obviously) the game against the rival Portland Winterhawks, so let’s check out some action shots from the first period!

As you would expect from a Seattle/Portland matchup, the game quickly turned chippy with physical play all around the rink and plenty of pushing and shoving after the whistle. Here T-Birds’ left wing Riley Sheen (left) and right wing Seth Swenson (right) are involved in a small dust-up with Portland’s Adam De Champlain.

Center Connor Sanvido controls the puck in front of the Portland bench during the first period.

About seven minutes into the game, the Thunderbird found themselves on their second powerplay of the night. Barely 10 seconds into the advantage, Seth Swenson powered a loose puck past Portland goalie Cam Lanigan to give the T-Birds a 1-0 advantage in the first. I didn’t get a good frame of the goal, unfortunately, but I did get a decent photo of the resulting celebration.

Sheen is all smiles after Swenson scores his first goal of the year on a power play in the first period.

Delnov chases down a loose puck while in the neutral zone during the first period.

That’s it for photos from the first period. Let’s move onto the second!

As we’ve previously established, the game turned very physical quickly. It came as no surprise when, nary two minutes into the second period, left wing Mitch Elliot and Portland right wing Joe Mahon dropped gloves and earned themselves a five-minute fighting major, but not before Elliot forced Mahon down to the ice.

Center Tyler Alos slides a centering pass through the reach of Portland’s Kirill Vorobev and towards the Portland goal. 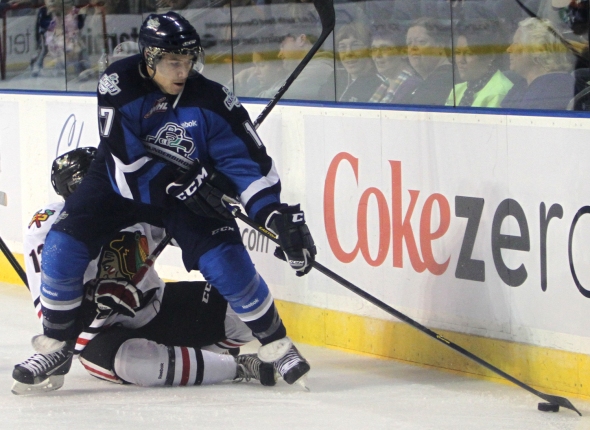 Theodore controls the puck in the Portland zone during the second period.

The Winterhawks scored two goals in the second period, taking a two score lead into the third period. For the third period, I moved to my typical spot between the benches to get photos unblocked by the glass, where it looks like my efforts paid off…

Defenseman Jared Hauf brings the puck up the ice early in the third period.

Theodore slides a pass up the ice and into the neutral zone.

Forsberg knocks away a puck heading for the Seattle goal in the third period.

Delnov attempts a back-door shot on the Portland goal, but Portland’s goalie Cam Lanigan makes the save.

And, since it’s a Seattle/Portland game, why don’t we end the blog on a shot of another fight? Deal? Deal.

Defenseman Taylor Green and Portland right wing Joe Mahon prepare to land punches on each other late in the game.

And that’s it for this edition of Bird Watching! The Thunderbirds return to the ShoWare Center Saturday night, October 6 for a game against those [sarcasm]beloved[ens] hated rivals directly to the north, the Everett Silvertips. I’ll be there, will you?

Well now, isn’t this a pleasant surprise? Another edition of Bird Watching! I do have to apologize for the long breaks in between this post and my last one; my quarter is very busy with three classes and a lot of work at Seattle University. But I have the time now, and I’ve got the photos from an always-special game: the annual Teddy Bear Toss game!

Every year, many (if not all) WHL teams hold a Teddy Bear Toss game where fans bring teddy bears to donate to charity—the Thunderbirds give the bears to the WARM 106.9 Teddy Bear Patrol which gives them to local firefighters and other emergency responders to give to children in times of crisis. The best part about the Teddy Bear Toss, though, is seeing all the bears thrown onto the ice after the first T-Birds goal. But before we see the bears thrown to the ice, the players must be introduced…

The Thunderbirds’ starting lineup is introduced to a capacity crowd at the ShoWare Center Jan. 28.

A couple of stuffed animals have great seats for the beginning of the game. They didn’t even get to watch a full period, however, as Connor Honey opened the scoring for the Thunderbirds with seven minutes left in the period.

Before that, though, the Thunderbirds had a couple of other decent shots on goal… 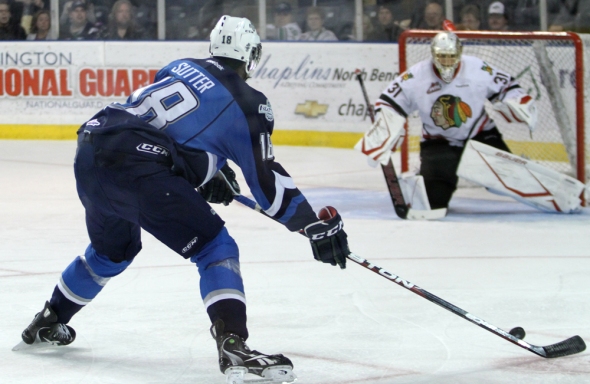 Defenseman Dave Sutter takes a shot on the Portland goal early in the first period.

As said before, Connor Honey put the Thunderbirds on the scoreboard with his first goal as a Thunderbird. Just as the celebration started on the ice, the teddy bears went flying…

Here’s a cool shot I got while the stuffed animals were being thrown on the ice. I like this photo a lot because while you can still see the fans, including a couple bears that hadn’t been thrown over the boards yet, you can also see the ice starting to get littered with animals in the reflection off the glass. It all made for a nice shot. 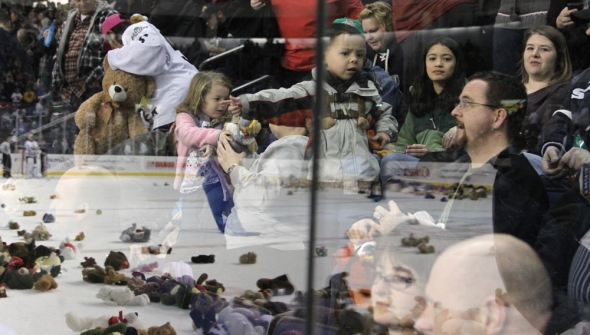 Being a Seattle/Portland rivalry game, the match was littered with hard hits and checks into the board. Here are a couple photos of those hits including part of a Luke Lockhart string… 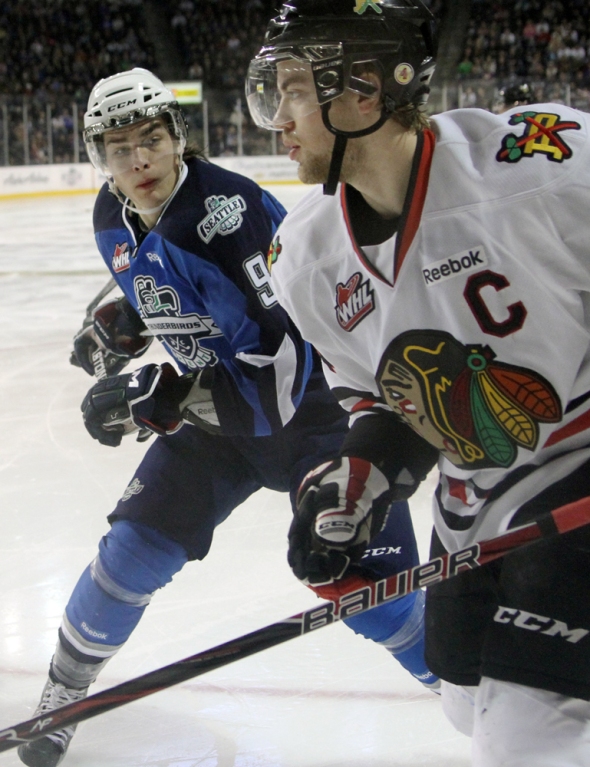 Center Justin Hickman is about to slam Portland defenseman William Wrenn into the boards in the Portland zone during the second half.

The jostling turned into a good ole-fashioned check later on…

Unfortunately I wasn’t in position to get Honey’s first WHL goal, but I did have a nice viewpoint on what could have been his second…

Portland’s William Wrenn blocks a shot late in the second, resulting in a loose puck in front of the Portland net.

And we’ll move to the third period, where I took my normal spot of between the benches. Although I missed left winger Chance Lund’s goal, I did get a good shot of him celebrating with Hickman… 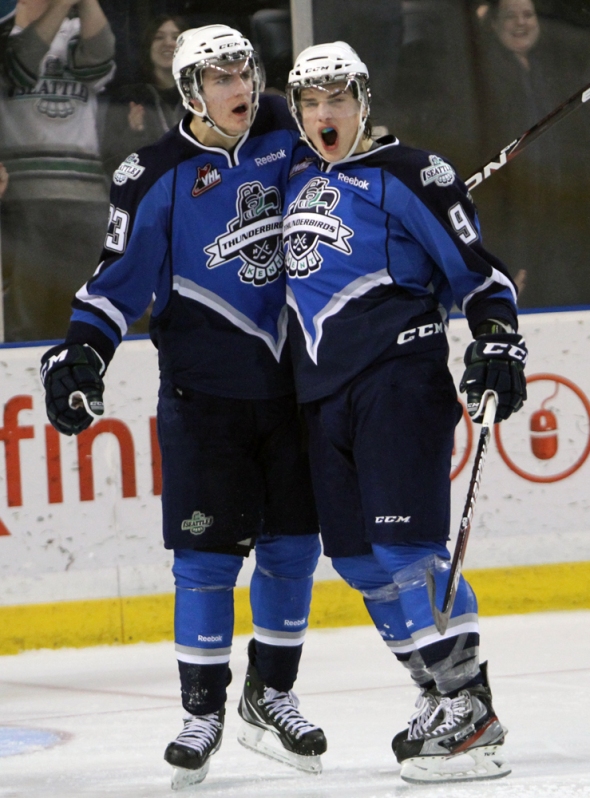 For that weekend of games, center Justin Hickman wore a wireless microphone for Q13 Sports. I wanted a photo that showed the mic and ended up with this beauty. Unfortunately, I cannot tell where it is on him. Can you spot the microphone?

Justin Hickman returns to the bench after a shift during the third period.

Here’s newly-acquired right winger Dillon Wagner escaping from being pinned into the boards by Portland defenseman Derrick Pouliot. Wagner, a former Winterhawk, was claimed off waivers back in early January.

During warm-ups before the game, I noticed something different about the Thunderbirds players: they weren’t wearing the typical dark blue helmet, they were sporting white lids for this game. I’m not sure when exactly the white helmet entered the Thunderbirds’ unifomr options, but it certainly does look pretty slick. Here’s a shot of the helmet on the bench, as modeled by right wing Seth Swenson.

Right winger Branden Troock tries to get at a rebound in front of Portland’s Marruth in the third period.

And for our last photo, let’s check out one final hit by Justin Hickman…

Unfortunately that’s it for photos for this post. Hopefully it won’t take me so long to post again, and I hope to see you all down at the ShoWare Center real soon!

‘Til next time, Go T-Birds!