Wednesday, Jan. 12, there was a special guest down at the ShoWare Center: Steve the Producer from KISW 99.9 FM.  Steve will be tending the net for the Thunderbirds’ celebrity game February 26 but wanted to avoid repeating his “ten goals in one period” performance he had in his last celebrity game a few years ago.  If I remember correctly, he said he was still burned from all the red lights that went off behind him.  To ensure that he would not be burned again by the dreaded red lights, he enlisted the help of T-Birds goalies Calvin Pickard and Michael Salmon and received a crash course in becoming a brick wall between the pipes.

Before all the lessons, though, Steve had to get out all his gear, and boy was there a lot of it…

And here’s a nice photo of him lacing his skates (I don’t know why I like those photos; I also got one of Christie Johnson lacing up when she was at ShoWare)…

About then, one of the on-air talents of his show, Vicky Barcelona, arrived to catch Steve’s training on video.  She sat in the locker room chatting with him while he finished gearing up…

The pair had brought two video cameras, one for Vicky to hold and one to hopefully get a cool angle on some of the action.  He tried to find a way to connect it to his neck guard, but quickly decided it wouldn’t survive a direct hit from a puck… 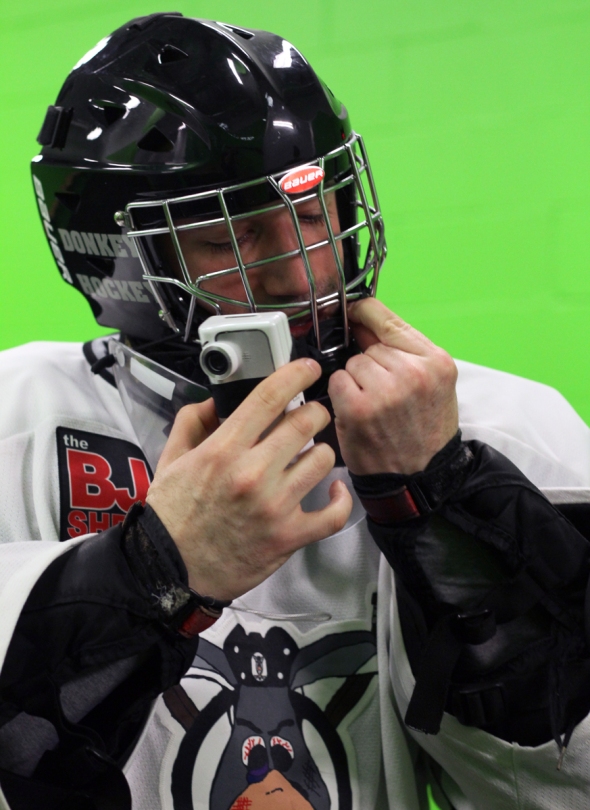 He was finally ready to head out onto the ice!  Unfortunately the ice wasn’t ready for Steve the Producer, though, as he had to put the goal he’d be protecting into place on the ice. 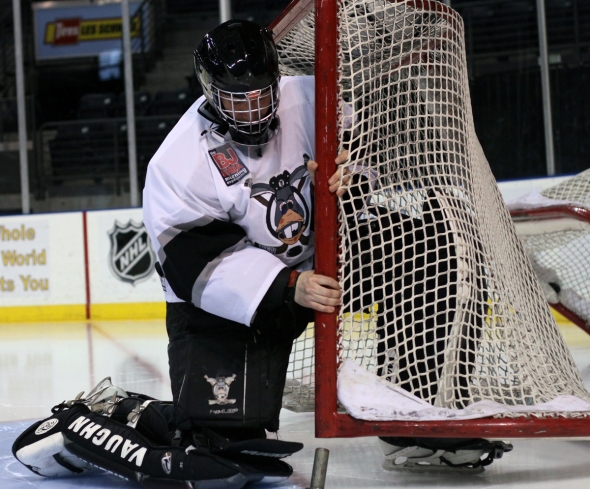 Since the camera couldn’t be attached to Steve’s neckguard, Vicky tried to attach it to the boards behind the net.  I’m not sure if it worked or not, but if it did, I bet they got some cool footage from it. 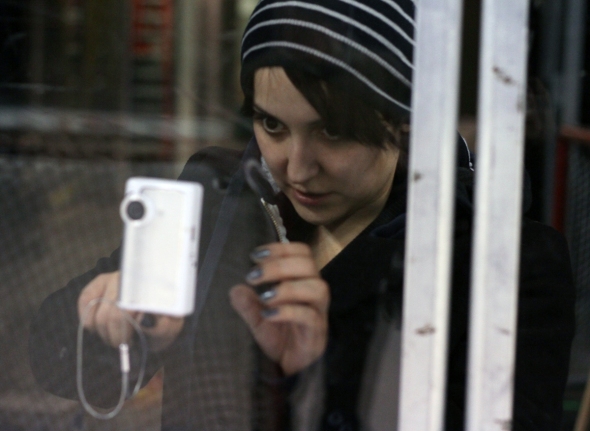 Once the net was in place and the video camera was taped up, Calvin and Michael were ready to come out and teach Steve how to tend goal.  Before they got started, however, introductions were made and the two T-Birds got a feel for Steve’s past goalie experiences…

And Steve had to film a quick intro to the video for his blog, http://blogs.kisw.com/stevetheproducer/.

After the intro was filmed, Michael and Calvin took a couple shots on Steve to see what he needed to work on.  After seeing that and consulting with him, the trio thought it would be best to work on Steve’s butterfly drops (note: I think I remember that term, I’m sorry if I’m a tad off on it).  In this picture, Michael (left) demonstrates the proper knee position for the butterfly while Calvin helps Steve get his knees into a similar pose.

Next they worked on sliding across the face of the goal while keeping the leg pads facing out.  This time it was Calvin who demonstrated the proper techniques. 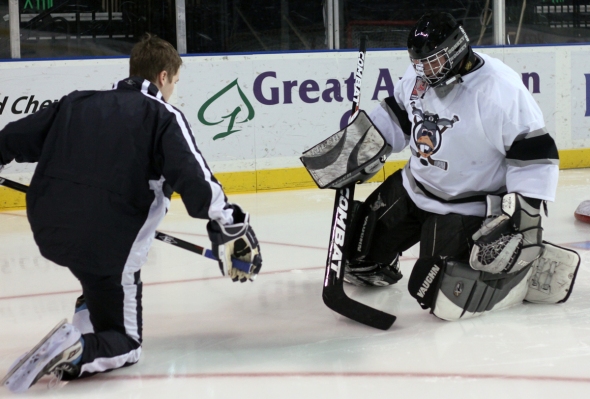 In a drill to test this new skill, Michael and Calvin took shots on Steve after passing the puck amongst each other.  Here it’s Michael firing on the net. 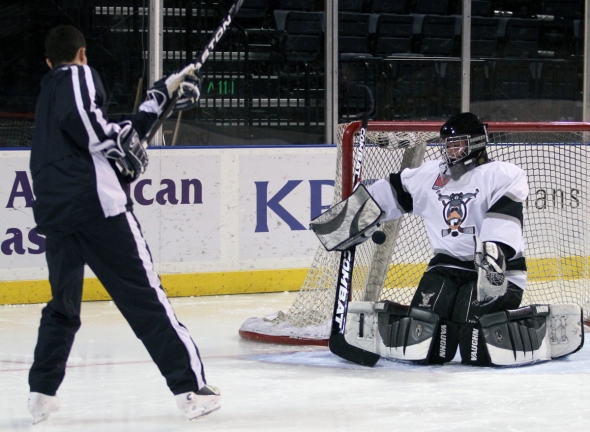 Being goalies, Calvin and Michael don’t get much of a chance to score a goal.  It was nice to see them be able to get one into the net themselves.  Calvin was so excited over getting one in he couldn’t help but celebrate…

Then came a lesson on defending the net when the attacking player is behind it.  Here, Calvin demonstrates how he uses his stick and pads to stop a puck from slipping though on the ice.

Since I was on the ice for all of this action (I didn’t have to worry about 12 players in pads flying all around me) I decided to try and get some photos I wouldn’t have a chance to make during a game.  During the drill for defending against an attack from behind the net, I placed my camera on the ice, aimed it at Steve, and fired away from a low angle.  This was my best shot from trying that out.  Unfortunately I cut off the right half of Michael’s body.  It’s still a decent shot, though; it could have turned out much worse.

To wrap things up, Michael and Calvin took shots on Steve, testing everything he’d learned during the lesson.  He did a good job and made a good amount of saves, including this one he made while falling down.

After they were done, Steve taped a closing for his videoblog, thanking the two Thunderbirds for showing him the ropes.

While recovering from the extreme workout, Steve asked for some stretching tips.  During this, Vicky got a close up of the sweat pouring off Steve’s head.   I particularly like the shot on Vicky’s video camera… 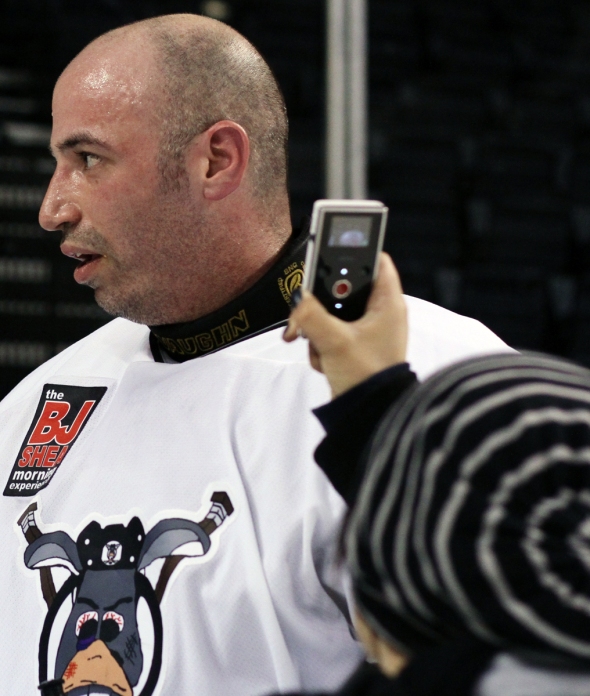 To end everything, he asked for a photo of the three goalies together, and I happily obliged. 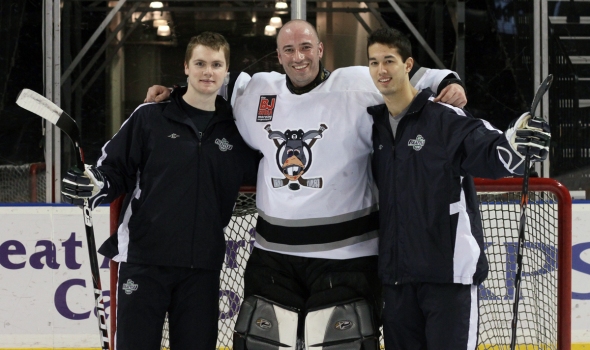 A special thanks to Steve and Vicky for coming down and spending part of the day with us.  I had a blast shooting this, and I hope they enjoyed their time with the Thunderbirds.  If you want to catch Vicky and Steve on the morning, tune into the BJ Shea Show on KISW 99.9 FM between 6 and 10 AM.

Don’t forget to come out to the ShoWare Center tomorrow and watch the T-Birds renew their rivalry with the Everett Silvertips at 7:30.  If you can’t make it to Kent, be sure to watch the game on Fox Sports Northwest as the network will be airing it live!