Hey T-Birds fans, it’s time for another edition of Bird Watching.  In this post, we’ll go through photos from the first period of the win against Chilliwack last Sunday?   Why the first period only, you ask?  Well, like the T-Birds, I had a pretty good game and ended up with about 50 pretty good photos that’ll be used.  Rather than put them all in one mega-post, I thought it best to break them over two posts.  With that, let’s see what happened in the beginning of the game, shall we?

We’ll start off with one of the T-Birds’ 22 shots on goal in the period, this one by right wing Burke Gallimore. 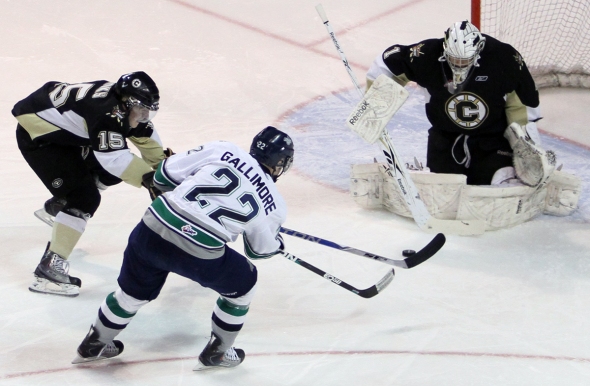 And on the other end of those 22 shots was Chilliwack goalie Lucas Gore, who managed to block them all.

Sunday was Mascot Night at ShoWare Center where mascots from all over the area joined Cool Bird at the game.  During the game, however, was all Cool Bird.  Here, he practices his drumming skills atop a follicly-challanged T-Birds fan’s head.

About five minutes into the game, Chilliwack center Steven Hodges found himself on a breakaway with only Seattle netminder Calvin Pickard between him and the goal…

After a successful poke check by Pickard, Hodges couldn’t stop himself from crashing into the Seattle goalie and earned a two minute charging penalty for his efforts.

Later on, center Travis Toomey found himself to the right of the Chilliwack goal with a loose puck in front of him.  Unfortunately he couldn’t place the blade of the stick on the puck and fire it onto the goal. 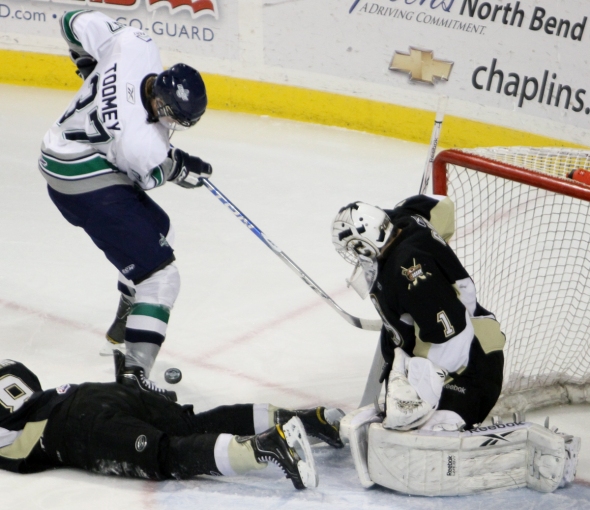 Shortly after it was center Luke Lockhart with the puck to the right of the net.  Instead of firing on the goal, though, he sent in a centering pass in hopes an onrushing teammate could bury it in the net. 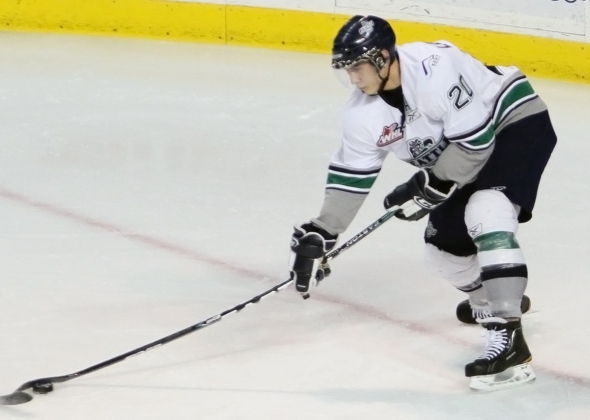 Center Colin Jacobs sees his angle to the goal blocked by a diving Lucas Gore.

The first period was very much a battle between the two goalies.  As sad before, Gore blocked 22 shots for Chilliwack while Pickard stopped 12 of Chilliwack’s scoring chances, including this one pictured here…

And here’s one more of Gore’s blocks… 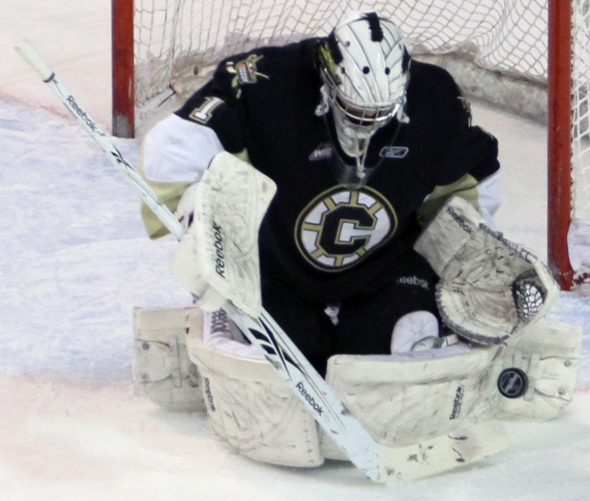 Right wing Marcel Noebels was injured in the first period during the 5-3 penalty the Thunderbirds killed off, but before that he had a couple of scoring chances, including this shot on goal.

(Note: this is the shot after Noebels’ shot on goal)

Noebels takes a shot on goal.

Speaking of the 5-3 penalty kill, and of Noebels, here he is going down to the ice, eliminating Chilliwack center Kevin Sundher’s chance at putting the puck on Calvin. 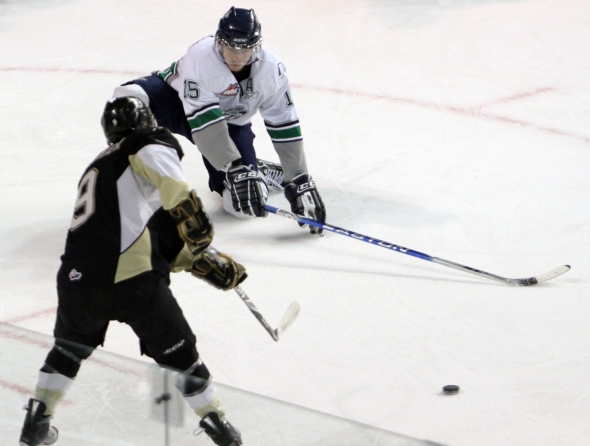 And here Pickard knocks a puck from Chilliwack right wing Robin Soudek away during the penalty kill.

Toomey tries to pass the puck to a teammate after being knocked down during a breakaway by Chilliwack left wing Ryan Howse.

Center Justin Hickman also had himself a breakaway during the first period, racing down the ice towards Gore and attempting to get his first WHL goal after getting his first point a few weeks ago.  As we know already, Hickman couldn’t quite get the puck through Gore, but I did get a couple of photos from the play.

Hickman tries to get a puck through Gore late in the first period.

And as I mentioned before, it was mascot night at ShoWare Center and they all gathered on the ice during the first intermission for a quick game of broomball.  20 mascots in all were in on the game, including Harry the Husky from my alma mater, the University of Washington.

Harry the Husky uses his broom as a guitar before the macot broomball game during the first intermission.

Another one of the mascots involved was the Mariner Moose, who’s shown here with our own Cool Bird. 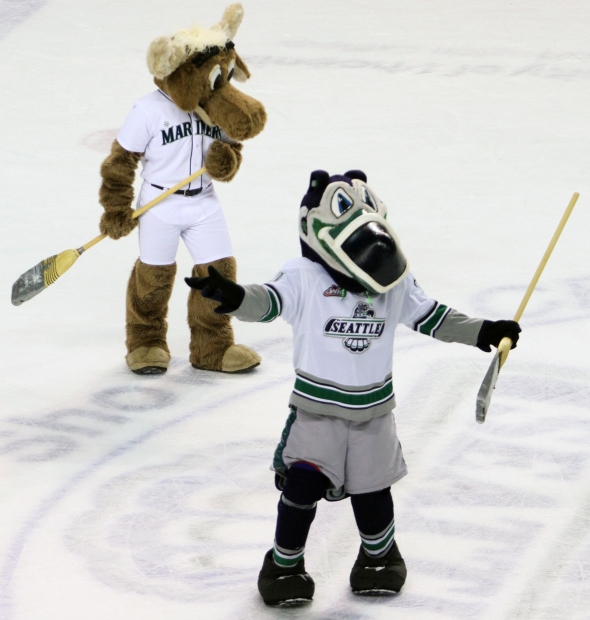 Blitz (the Seahawks’ mascot) takes possession of the ball near the north goal in front of a bear from Mitzel’s American Kitchen.

A few of the mascots were quick learners in physical nature of hockey, including fights.  Here Rhubarb of the Tacoma Rainers takes part in an on-ice fight with Fido from the Seattle Animal Shelter. 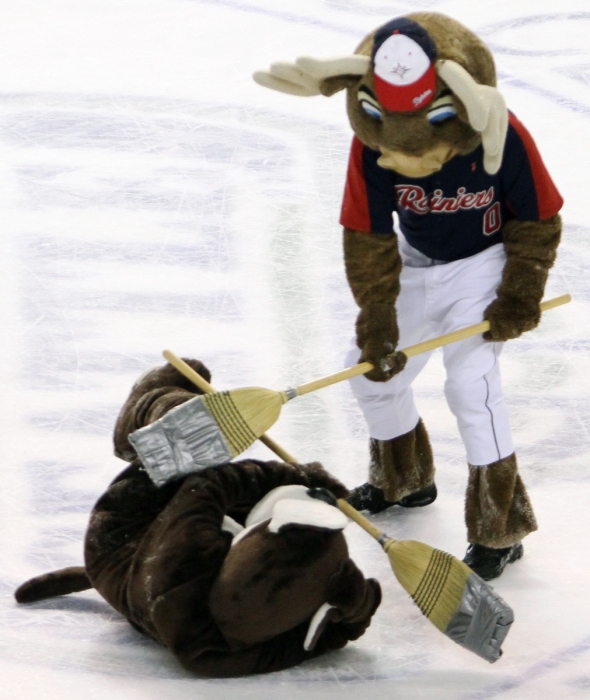 At the end of the game, things deteriorated into a somewhat of a madhouse.  Blitz relapsed into his football experience by picking up the ball and running with it, something frowned upon in hockey.

And with that, the second period began.   Let’s hold off from those photos for next time, where we’re seeing the T-Birds’ comeback from 3-1!  As always, leave your comments and questions in the comments section below…