Hello once again Thunderbirds fans, and welcome to the 2012-13 season! I’m team photographer Kyle Scholzen and I’m back for another year behind the camera for everyone’s favorite hockey team! Once again, I’ll be taking photos at most of the Thunderbirds’ games, team events, and perhaps a few other activities, bringing you guys a bit closer to the action on and off the ice. Let’s start out the new year off with a behind-the-scenes look at what goes into Training Camp Check In!

August 22 was training camp reporting day for old, new, and future Thunderbirds players. On the list of things to do for players were take updated headshots, film introduction videos, and participate in fitness testing, among other things. I was there to document some of the goings-on, so let’s see some of the photos from the day!

Camp attendee Austin Adamson holds up a sign with his name before filming his player introduction video. Players held up signs with their names on them prior to taping to help with player identification during post-production.

Left winger Mitch Elliot (left) chats with general manager Russ Farwell after taking his photos and filming his intro video. Elliot is returning for his fourth year manning the left wing for the T-Birds.

Center Brayden Low is all smiles while recording his introduction video. On Check In Day, the players filmed the videos played each game while the starters are being introduced. In order to get the five or 10 seconds of screen time, the players are told to stand still for 30 seconds. It may sound easy, but staring at a camera for 30 seconds always seems longer than it really is. 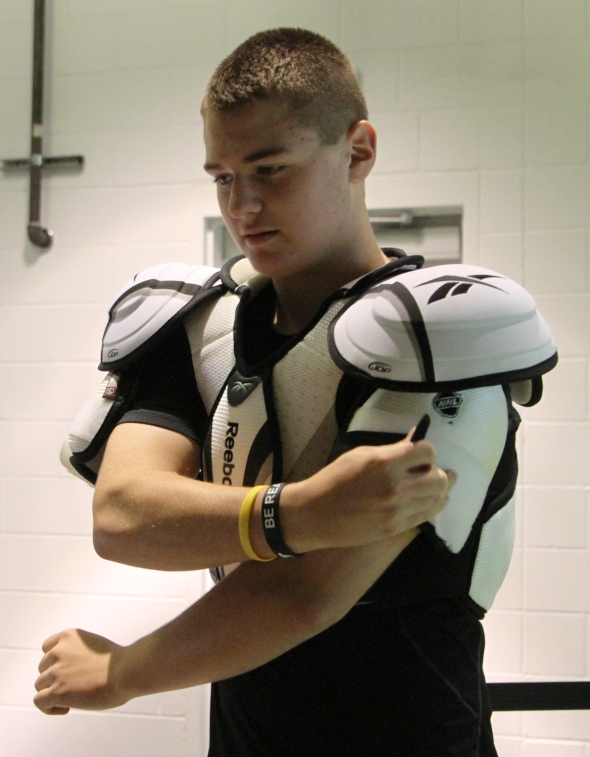 Tristan Simm puts on pads before having his headshot taken.

At the time this photo was taken, most campers had arrived at the ShoWare Center and checked in. Seventy players attended the team’s five-day training camp in an effort to make the preseason roster.

Mathew Barzal, the team’s first-round draft pick this past May, dons pads and a Thunderbirds jersey in preparation for his headshot before the start of training camp.

Once all the photos were taken and videos filmed, it was time to move into the weight room for some fitness testing…

New Thunderbirds defenseman Jesse Forsberg takes part in the vertical jump during fitness testing at the beginning of training camp. Forsberg spent the last three years with Prince George and was acquired early in August. 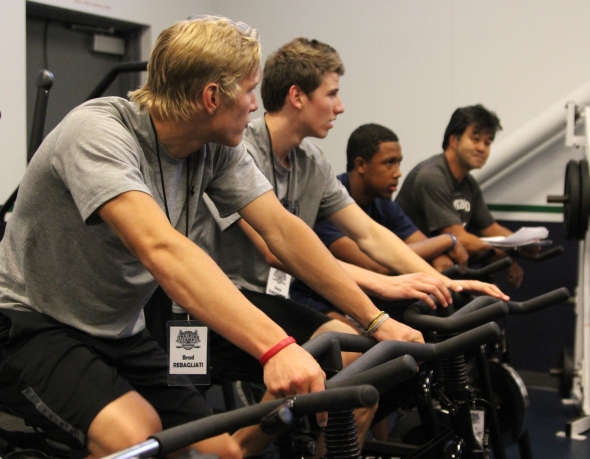 Camp attendees loosen up their legs on stationary bikes after doing the leg press exercise during fitness testing.

Short post today I know, but there’ll be plenty more once the season begins! Although the regular season doesn’t start until September 21 at Portland, the T-Birds’ home slate actually begins with a preseason tilt against Everett this coming Friday, Sept. 14! I’ll be there, will you guys?

Like what you see? Have any comments or suggestions for the blog this year? Say so in the comments section below!

Welcome back to Bird Watching, T-Birds’ fans!  It’s been nearly three months since the season ended and preseason camps are slowly creeping up on us.  One order of business had to occur before the players could hit the ice again: they needed someone to coach them.  Finally, after an exhaustive search, we know who’ll be the head Thunderbird this year: Steve Konowalchuk. 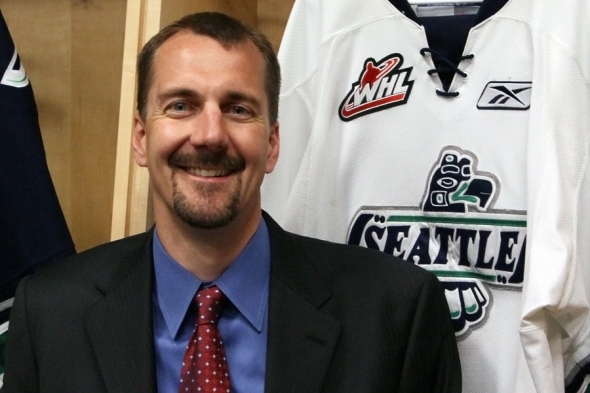 Konowalchuk comes to us from the NHL’s Colorado Avalanche, where he was an assistant for two years and worked with player development for an additional one.  He also had much success as a player, playing in the NHL for 13 full seasons for both the Avalanche and the Washington Capitals.  This isn’t his first foray into the WHL, however, as he played his junior hockey down I-5 with the Portland Winterhawks.  Never fear about his priorities now, however, as he made sure to mention how he “can’t wait to beat the Winterhawks,” and surely worked his way into the hearts of T-Birds fans everywhere.

Before he was formally introduced as head coach, however, I was tasked with getting a portrait of him to send out with our press release.   To get the best photo possible, I had run of the locker room and the use of plenty of jerseys to use in the background… 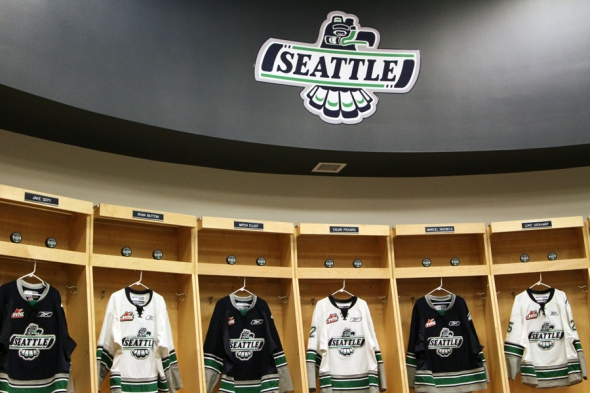 I knew I wanted to incorporate the Seattle logo in the background, so I sat Coach Konowalchuk to the side of a jersey (a white one so his dark suit wouldn’t blend into the dark blue jersey) and snapped a few frames.  The photo on top and this one are the two I liked from that pose. 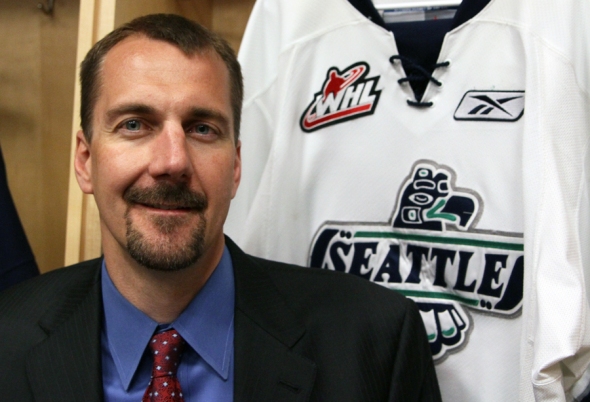 After a couple other poses that produced uninspiring results, I decided to pull out a ladder and use the floor logo as a background for Coach to stand out from.  At first I told him to smile and naturally cross his hands as I fired off a burst of photos.   This is what came out…

Not bad, huh?  It does stand out—you don’t normally see portraits of people taken from above.  The combination of the logo and solid-colored floor provide a great background that allows him to pop out off.  I was happy with that, but I knew the photo could be better by seeing more of the logo and seeing more of the gritty style Kolowalchuk was known for in his playing days.  I told him to cross his arms, look serious, and fired away again…

Much better; his arms are crossed, which move his hands up and allows me to cut out a lot of dead space under the logo and his facial expression seems a bit more natural.   After this beauty came out, we tried one more pose and I let him go back to touring the ShoWare Center and talking with General Manager Russ Farwell.

After a couple hours’ wait, it’s time to head up to the club lounge and hold the press conference that announces Konowalchuk as the head coach.  Russ had the honor in introducing him to the gathering of media and fans waiting for official word on who’d next lead the T-Birds.

Steve prepared a statement explaining his passion for working with young players and developing their skills in preparation for future greatness.

After his statement, it was time for Konowalchuk to meet with various media outlets and the fans in attendance.  Here he answers questions on tape for KCPQ 13… 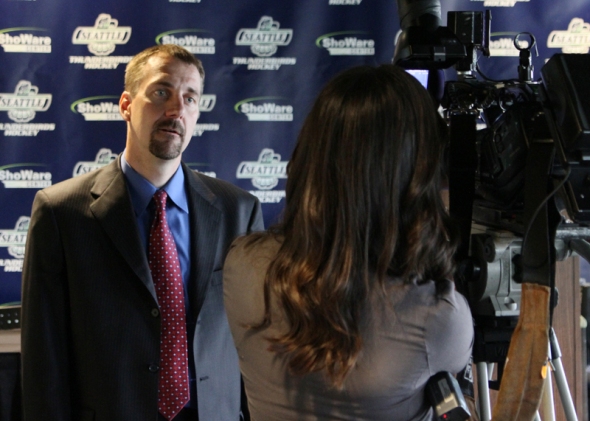 Here he is chatting with a print reporter… 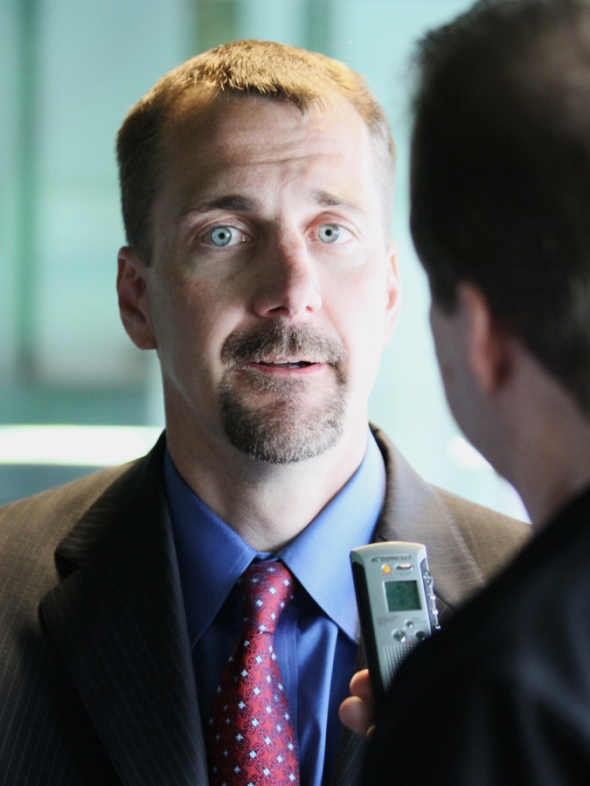 T-Birds announcer Thom Beuning had a long interview with him for seattlethunderbirds.com… 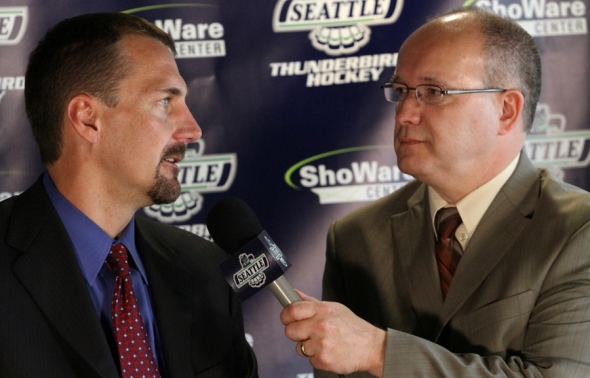 And Konowalchuk had an on-camera chat with KOMO 4 sports reporter Chris Miller.

It wasn’t just the local media Konowalchuk met with, however, he introduced himself to the fans in attendance as well.  This young T-Birds fan wanted a photo with the new coach and Steve graciously obliged… 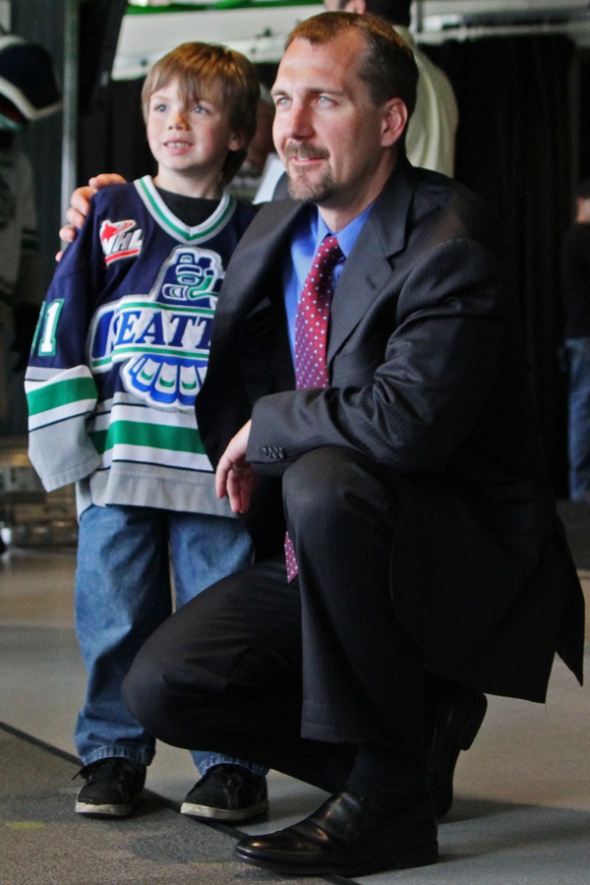 And he chatted about the team with this group of Thunderbirds supporters at the end of the press conference.

Alright, that’s it for this version of Bird Watching.  Thanks for joining in and be sure to check back in two months once rookie and preseason camps start up.